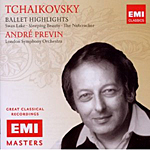 EMI Records Ltd. could probably continue as a record company indefinitely just by re-releasing Andre Previn's 1970's recordings with the London Symphony. It seems as though they've already reissued highlights from his complete sets of Tchaikovsky ballets about 800 times. Fortunately, 800 re-releases still aren't enough to do justice to this great music or these great performances, so it's good to have them back again at so reasonable a price on this 2011 EMI Masters "Great Classical Recordings" disc.

The disc includes excerpts from all three of Tchaikovsky's big-three ballets: Swan Lake, Sleeping Beauty, and The Nutcracker. Each of the suites includes about twenty-five minutes of highlights and six to eight selections from each respective ballets. Most important, because Tchaikovsky's music is always a nonstop flow of inspired melodies, both graceful and dramatic, we get performances to match. Previn's interpretations are at once exciting, subtle, enchanting, and lovely. Unlike many other, higher powered productions, Previn's readings bring a true fairy-tale richness and delicacy to the scores. And the sound, like almost all of producer Christopher Bishop and engineer Christopher Parker's collaborations, is first-rate.

First up is the music from Swan Lake, which the composer premiered in 1877. It's the earliest and the most symphonic-sounding of Tchaikovsky's big-three ballets, which is perhaps why it did not do as well initially as his later works did. Previn recorded the ballet in 1976, the last of his recordings of the trio. Maybe it was because people expected so much of it by that time that it tended to disappoint a few listeners. The fact is, while it's maybe not quite as vital or energetic as his earlier performances, perhaps a tad more casual, I've always found it one of the best complete recordings available. Among the selection of excerpts here, we get the big "Waltz," the "Dance of the Little Swans," the "Hungarian Dance," the "Spanish Dance," and others. OK, I admit I missed hearing the closing scene, the big finale, but what we do get is fine.

Even more to the point is Previn's complete Sleeping Beauty (1890), a recording first released in 1974. I fell in love with its glitter and charm at first listen and immediately placed it at the top of my recommendations for the work. Sometime afterwards it appeared on other rosters of top contenders as well, including High Fidelity magazine's "Record Riches of a Quarter-Century," Gramophone magazine's "Recommended Recordings," the Penguin Stereo Record Guide's listing, etc. I couldn't have been happier to see that others agreed with me and shared my delight in this wonderful music. Among the selections, we get the "Waltz," the "Rose" adagio, "The Panorama," the "Pas de caractere," the "Pas de deux," and the Adagio, Coda, and Finale. If we find more music from Sleeping Beauty than from its companions, it's only fitting; this suite is the highlight of the highlights.

The final suite is from Previn's 1972 recording of The Nutcracker (1892), and here the conductor has more competition. My own personal favorite is from Antal Dorati on Philips, but certainly Previn is in contention. His is a more warmly affectionate reading than most others, softer in approach, richer and more comfortable. The items on the disc include the "Miniature Overture," the "March," the various dances ("Arabian," "Chinese," "Russian," "Reeds"), the "Dance of the Sugar Plum Fairy," and the "Waltz of the Flowers." In other words, all the big numbers.

As for the sound, EMI recorded the first item on the disc, Swan Lake, last in the sequence, in Kingsway Hall in 1976. For me, it sounds the cleanest, clearest, most transparent of the lot, with the best sense of orchestral depth. It's a trifle more aggressive than the other recordings but more dynamic, with extended highs and gorgeous string tone. EMI did Sleeping Beauty two years earlier, in 1974, in Studio No. 1 Abbey Road. Here, the sound is a touch warmer, softer, and more resonant than that in Kingsway Hall. It's OK because it suits the music. Besides, it's very pleasant and listenable, capturing the magic of the music. Dynamics and stage depth are adequate, too, if not so pronounced as in Swan Lake. Finally, The Nutcracker derives from a 1972 recording again made in Kingsway Hall, but this time it hasn't quite the clarity of Swan Lake. The sound quality is midway between the other two recordings, more transparent and dynamic than Sleeping Beauty but not as lucid as that in Swan Lake. In any case, the differences are small, and all three recordings are excellent.

I'm not entirely sure who buys highlights albums, but if you're in the market for about seventy-three minutes of Tchaikovsky ballet snippets, you can't beat Previn's accounts. They might even encourage a person who doesn't already own recordings of the complete scores to explore them further.