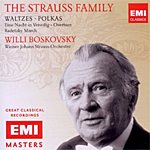 According to everything I've read about Willi Boskovsky, his orchestras didn't particularly like him as a conductor. No matter. From playing violin with the Vienna Philharmonic he went to leading the orchestra in Strauss family waltzes in the 1950's and audiences adored him, which is all that counted. His Decca recordings from those early days are still the yardsticks by which many critics measure all newer Strauss recordings. By the early Seventies Boskovsky was recording for EMI with the Vienna Johann Strauss Orchestra, and he re-recorded most of the major Strauss repertoire for them. Then, when digital entered the scene, he re-recorded them yet again, many of them two more times. What we have in this 2011 EMI Masters "Great Classical Records" release is a reissue of twelve famous pieces by Johann Strauss I, Johann Strauss II, and Eduard Strauss that Boskovsky recorded between 1971 and 1973.

Boskovsky's later digital Strauss recordings were more sprightly and open than these analogue recordings with the same orchestra, the analogue sound warmer and fuller, true, but softer and less detailed, too. These analogue performances also seem a fraction slower and less spontaneous than either his earlier Decca renditions or his later digital renderings. Not that they aren't still delightful; they just don't quite match Boskovsky's other releases.

Included among the waltzes, polkas, and overtures on the disc we get Strauss Jr.'s "Blue Danube" waltz, of course, the "Champagne Polka," the "Tales from the Vienna Woods" waltz, the "On the Hunt" polka, "A Night in Venice" overture, the "Vienna Blood" waltz, the "New Pizzicato Polka," the "Artist's Life" waltz, and the "Kaiser Waltz." Filling out the selections are brother Eduard Strauss's "On Track"; and father Strauss Sr.'s "Sigh" galop and "Radetzky March," the latter a traditional show closer.

One minor observation: The first times Boskovsky recorded "Tales from the Vienna Woods" (1963 and here in 1972), he used a real zither in the famous zither part, but in his first digital recording (1982) the conductor chose to bypass the zither and use a violin. EMI must have gotten some flack for that, and a few years later (1985) he relented and re-recorded the piece with a zither. I prefer the zither, as do most folks, I suspect, and it's good to hear it in its rightful place here.

Anyway, this latest disc presents a useful collection of Strauss music at a reasonable price. If it weren't for the fact that Boskovsky did better work and EMI and Decca offer about 800 other albums of the conductor's Strauss at a comparable price, I could be more enthusiastic about it. As it is, I'd recommend the disc only as a point of comparison alongside Boskovsky's first-choice material.