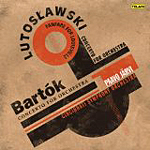 In the booklet note, maestro Paavo Jarvi says he is fond of coupling together similar pieces of music by different composers so that listeners can make comparisons and connections between them. In this case it is Bartok's Concerto for Orchestra, written in 1943, and Lutoslawski's Concerto for Orchestra, written a decade later in 1954. Additionally, Telarc have included Lutoslawski's little Fanfare for Louisville for good measure.

If the coupling points out anything at all, it's how much better the Bartok work is. There is a reason why people cherish some pieces of music as classics, warhorses of the industry, over others. Nevertheless, that's not to take anything away from Lutoslawski's Concerto. It is a bit shorter than Bartok's work and written in three movements rather than five, but it gains something from its more concise approach. Both pieces of music use variations on folk tunes; it's just that Lutoslawki's Concerto doesn't have the number of memorable tunes in it that Bartok's familiar work does nor the thematic or rhythmic intensity. Of course, both pieces contain the instrumental emphases that their titles suggest.

As far as Jarvi's interpretations go, they are among the conductor's best work. The Bartok hasn't quite the forward thrust or pent-up tensions of my favorite Fritz Reiner recording (RCA and JVC), but it does command one's attention from beginning to end. I especially enjoyed the baleful atmosphere of Bartok's third movement, which the composer called a "lugubrious death song," and the relatively lively and joyful finale. The Telarc sound helps, too, very natural, very realistic, and fairly well staged, if a trifle softer, cloudier, and more rounded than usual from this source.

For those folks with SACD players, Telarc also make the performances available on a hybrid CD/SACD disc (Telarc SACD-60618). The SACD version sounds slightly more vibrant to my ear than the regular CD issue, but the difference is subtle. I had no chance to listen in more than two channels.