Having apparently exhausted the repertoire of Vivaldi a few years before, Fabio Biondi and his Europa Galante players embarked on Mozart's five violin concertos, the first three of which appear on this disc. The results are mixed. 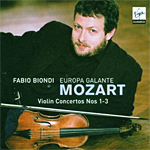 Listeners know Biondi well for his hearty, zestful approach to music making, and while this might work fine in baroque pieces, he could have better moderated his performances in these later, classical pieces. Maybe I'm just old-fashioned (yes, probably), but I found most of Biondi's readings here lacking in grace, elegance, or refinement. It's true that the slow, middle movements come off well when Biondi holds up long enough to let the music breathe, especially in the Andante of Concerto No. 2, but the outer movements are just too fast and perfunctory for me.

A quick comparison to older recordings (there's that old-fashioned guy again) by Grumiaux, Mutter, and Oistrakh reveals a wealth of subtlety and nuance that simply isn't there with Biondi. Nor did I find Biondi's playing of the principal parts particularly striking; indeed, most of the time, he tends to fade into the backdrop.

However, there are two compensating factors with Biondi: (1) There is no denying that his interpretations are exciting and provide a kind of exhilarating experience that most of the older recordings do not; and (2) his technique works reasonably well in Concerto No. 3, which is a more fiery and dynamic piece of music than the others to begin with. So, I rather enjoyed hearing No. 3 taken at a brisk pace, as it added to the music's already keen spirit.

The Virgin engineers capture a fairly natural sound, not too close up or too distant, with a warm, wide, full orchestral spread (there are about a dozen performers involved). Inner detail is not exactly vivid, but the overall result is natural and easy on the ear.