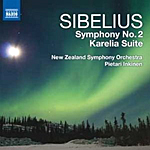 Among the seven symphonies of Finnish composer Jean Sibelius (1865-1957), his First and Second are probably the most popular, with my own slight preference going to the Second. The trouble is, as with most popular classical music, there are already any number of great recordings available, giving any newcomer tough competition. So Maestro Pietari Inkinen and his New Zealand Symphony Orchestra must go head-to-head with both of the stereo recordings of Sir John Barbirolli (Chesky and EMI), both recordings from Sir Colin Davis (Philips and RCA), plus recordings from Herbert von Karajan (EMI), George Szell (Philips), Osmo Vanska (BIS), and others. I wouldn't abandon these older recordings for Inkinen's newer one, but Inkinen at least makes a decent case for the work.

Sibelius wrote his Symphony No. 2 in D major, Op. 43, in 1902, conducting the première the same year and revising it a year later. Although the public quickly dubbed it his "Symphony of Independence," there is some debate as to whether the composer actually intended any symbolic significance in the piece. Be that as it may, it ends in a gloriously heroic finale that surely evokes a feeling of freedom and self-reliance, moderately well realized by the young Finnish conductor.

But let's start at the beginning, where Inkinen takes the opening Allegretto at a rather more light, bouncy gait than I've heard. Usually, this section moves from music calling to mind the misty northern regions of winter to sunnier climes as it progresses. Here, however, it appears to begin in the southern region. Fortunately, you can't say the conductor doesn't bring out the more lyrical, pastoral elements of the score, though. The next, slow movement, an andante, is far more serious in tone, with at its core suggestions of Don Juan's encounter with Death. With this segment, I found Inkinen slightly more lugubrious than necessary, never slow, just a bit swollen or turgid, especially at the start. Then it builds some appropriate tension and release.

The scherzo, marked Vivacissimo, moves along at a healthy clip and conveys most of the busy introduction well enough before maneuvering into the lovely oboe passage. After that, it returns briefly to the pastoral mood of the opening movement before going back to its more-tumultuous origins. This back-and-forth continues until we reach the famous Finale, with all its splendor. When the grand, heroic theme of the closing moments bursts forth, I was a little disappointed that Inkinen didn't make a bigger splash with it. The passage can be quite exhilarating, yet here it's hardly a ripple. I would guess Inkinen favors making it a natural extension of the preceding music rather than a separate, perhaps highly nationalistic, statement. Nevertheless, I prefer splashes to ripples.

Inkinen's coupling is the Karelia Suite, some of the music Sibelius wrote in 1893 to accompany a series of historical tableaux of Finland's past. The Suite gives us three of them: the Intermezzo, Ballade, and Alla marcia, celebrating the Karelia region. This music is also among the composer's most-popular output, second maybe only to Finlandia. Even though Inkinen still doesn't set the blood to racing as much as some other conductors have, notably Vladimir Ashkenazy (Decca) and the aforementioned Barbirolli (EMI), at least he imbues it with a glowing nobility of spirit. I enjoyed his handling of the Ballade in particular but thought the rhythms of the march could have used more zip and sparkle. Not that I prefer heavy-handed bombast; it's just that Inkinen's brand of subtlety goes too far in the opposite direction. I would have liked a more-moderate compromise.

Naxos recorded the performances at the Michael Fowler Center, Wellington, New Zealand, in 2008 (Symphony No. 2) and 2010 (Karelia Suite). It's a very warm, somewhat soft sound, with a big, spacious acoustic, yet little orchestral depth. There is a modest frequency range involved and at least reasonable dynamics. While the sound is perfectly adequate, it is by no means better than any of the older recordings I mentioned at the head of the review. Indeed, the sonics could have benefitted from greater range and impact to make their case.