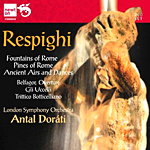 With the major record companies releasing fewer and fewer new or reissued recordings, it's good to have a company like Newton Classics taking up the slack. They have been re-releasing older classic material from Decca, DG, EMI, Mercury, Philips, and the like in original sound and at a reasonable price. Such is the case here, with this two-disc, 2011 reissue of orchestral works by Italian composer Ottorino Respighi (1879-1936), which contains five of his best-known, most-popular pieces. While the performances and sound do vary somewhat in quality, with conductor Antal Dorati leading three different orchestras in three different recordings, it's hard to argue about the cost.

Disc one contains the best performances and the best sound in the set. However, it is also probably the least well known music. Respighi was primarily a composer of tone poems, little musical impressions, his work based largely on sixteenth, seventeenth, and eighteenth-century forms and ideas. The first disc contains only one set of compositions, Respighi's complete Ancient Airs and Dances, three suites that he wrote in 1917, 1923, and 1932, based on various Renaissance works for lute by Vincenzo Galilei, Simone Molinaro, and others. Dorati recorded the suites in 1958 with the Philharmonia Hungarica for the Mercury label in their "Living Presence" series, and when Philips remastered most of the titles in the old Mercury series for CD in the Nineties, they thought so highly of Dorati's Ancient Airs and Dances, it was one of the first things they brought out.

So, here's the thing:  If you don't already own Dorati's performance of the Ancient Airs and Dances either on the regular CD or the later SACD, this is a chance to get the stereo version in a two-disc set for essentially the price of one disc. The interpretations are elegant, stately, gracious, and infectious, moving perhaps more slowly than some rival renditions, and not done on period instruments, but with the utmost feeling and attention to historical detail. The music is wonderfully melodic, rhapsodic even. Almost equally as important, the sound is smooth and warm yet entirely natural and realistic. In comparing this first disc to my older copy of the work on a reissued Philips/Mercury CD, I found no difference between them.  In other words, you're getting the best-possible mastering of the product.

Although disc two contains four more of Respighi's works, his most-popular material, I can't say I liked Dorati's performances in them anywhere nearly as much as I did in his Ancient Airs and Dances. The disc opens with Gli uccelli (The Birds), which the composer wrote in 1927. He based each segment of the work on Baroque music that imitated various birds. We get a "Prelude" based on music by Bernardo Pasquini, "La colomba" ("The Dove") on music by Jacques de Callot, "La gallina" ("The Hen") on Jean-Philippe Rameau, "L'Usignolo" ("The Nightengale") on an unknown writer, and "Il Cucu" ("The Cuckoo") on music by Bernardo Pasquini. These pieces are more festive and playful than the Ancient Airs and Dances, even if Dorati doesn't approach them in quite as lively a spirit or with as much charm as some of his competitors, like the Orpheus Chamber Orchestra (DG), Neville Marriner and the Academy of St. Martin-in-the-Fields (EMI), or Eugene Ormandy and the Philadelphia Orchestra (Sony). Moreover, the 1957 Mercury sound with the London Symphony Orchestra is not quite as lustrous as that for the Philharmonia Hungarica. However, during the same recording sessions with the LSO, Dorati also did Respighi's Brazilian Impressions (1928), which come off with greater color and pizzazz.

The second disc ends with Respighi's big guns, the Fountains of Rome (1916) and the Pines of Rome (1924), both suites played by the Minneapolis Symphony Orchestra and recorded by Mercury in 1960. Unfortunately, these are the least effective of Dorati's performances and the least well recorded. Frankly, compared to several other conductors in these works, they sound rather plodding. They don't seem as vigorous, as exhilarating, or as vivid as versions by Reiner (RCA), Muti (EMI), Batiz (Naxos), Lopez-Cobos (Telarc), Dutoit (Decca), or any number of others. Nor did I find the sound of Dorati and the Minneapolis Symphony as full-bodied, as smooth, as extended, or as powerful as the sound on some the other competing discs I mentioned, especially the superb old Reiner recording.

Nevertheless, as I say, when you're getting the second Dorati disc practically as a gift from Newton Classics, who can argue?