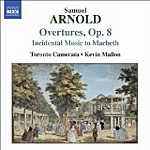 The disc's main contents are the six Overtures, Op. 8, that Arnold wrote in 1771, pleasant, lightweight affairs that begin sounding alike about ten minutes in. However, things perk up with numbers four and five, so if you get hold of this album, you might want to start there. Or listen to one overture per day rather than listening through all six at once as I did.

More to the point is the Incidental Music to Macbeth, written in 1778. It contains an assortment of tunes based on actual Scottish folk songs and is quite delightful. There is the odd incongruity of a typical eighteenth-century minuet right in the middle of things, but one can easily overlook that. The album concludes with the overture to Polly, a sequel to John Gay's Beggar's Opera of some years earlier. To maintain a continuity, Arnold uses a medley of themes from the earlier work. It's pleasant, though hardly world-beating.

The Toronto Camerata is a small group made up of players from the Toronto Symphony, the Canadian Opera and Ballet Orchestras, and Tafelmusik. They play well, in a lively manner conducted by Kevin Mallon. But they might want to tell Naxos to get their name straight: On the outside of the booklet cover, the record company label them as the Toronto Chamber Orchestra. Well, maybe they want folks to call them by both names. What do I know. The sound appears moderately distanced, so we get a good deal of warm, realistic hall ambience at the expense of much inner detail.

Email ThisBlogThis!Share to TwitterShare to FacebookShare to Pinterest
Labels: Arnold.Samuel