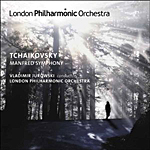 If you are considering this disc, I would advise you not to read the back cover of the jewel box, where it says "Recorded live at Royal Festival Hall, London." If you are like me, you may not care for live recordings, and that would be a shame because this one is not like most other live recordings. There is virtually no audience noise to deal with until the very end, when the audience unfortunately erupt into applause, and there is no vague, distant miking involved. In fact, the sound is most realistic, and the performance is quite emotional.

Tchaikovsky's Manfred Symphony is one of his most personal, the plight of Lord Byron's semi-fictional, semiautobiographical character mirroring to some degree the composer's own feelings of shame and guilt. Jurowski tells us it was the first Tchaikovsky symphony he ever conducted, calling it "inimitable Tchaikovsky, especially in the fantastic, one-of-a-kind melodies he invents, and also in his virtuoso ending." He says the Manfred Symphony is "challenging but gratifying because the symphony makes a huge effect on the audience.''

Maestro Jurowski, now the Principal Conductor of the London Philharmonic, emphasizes the pathos in the work, sometimes lingering to the point of being a tad lax or languid but not too often, yet manages to wring a good deal of excitement from the piece as well. Just listen to the climaxes of the first and fourth movements for proof of his patience in building to a really big finish. While the overall effect of this 2004 recording does not strike me as quite as energetic or heartfelt as Riccardo Muti's 1982 EMI disc with the Philharmonia, maybe the newer project's more robust sound makes up the difference.

Engineer Mike Hatch made the recording for the LPO's own record label, and he set the microphones close enough to the orchestra that, as I say, practically no audience noise intrudes. More important, the orchestral spread is wide, and transparency is paramount. Even the bass drum has a vibrant resonance about it, although it is not overpoweringly loud. Now, I wish the art director had chosen something other than black-and-white for the cover picture; although it is handsome, it tends to make the whole affair look a bit like a bootleg copy.