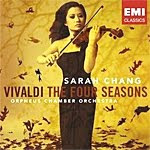 Maybe it's a woman's touch. These Four Seasons are among the sweetest, most gracious, most sensitive I've heard. That doesn't make them the best I've heard or my personal favorites by any means, but it makes them different in a most pleasant way.

Especially after hearing so many period-instruments groups galumphing through the Seasons at breakneck speeds, it's nice to hear Ms. Chang taking her time and smelling the flowers along the way. Not that there is anything slow or lugubrious about the interpretations, either; they are full, vigorous readings. The performances, accompanied by members of the Orpheus Chamber Orchestra, always a plus, just tend to put things into perspective better than some other competing versions, Ms. Chang going out of her way to portray each little tone painting--each bird flutter, each horse whinny, each dog yelp, each raindrop--as vividly as possible.

The results may not be as imaginative as the Drottningholm Baroque Ensemble on BIS, as exciting as the English Concert on DG Archiv or La Petite Bande on Sony, as pleasingly surreal as the Academy of St. Martin-in-the-Fields on Decca, as straight ahead as I Solisti Italiani on Denon, or as familiar as any of a dozen other top contenders. Yet Chang and company have their own charms, and grace and refinement are but two of them.

EMI's sound also helps win the day. While it is slightly thin, the delicacy of the reproduction tends to reinforce the cordial friendliness of Ms. Chang's renderings, and the recording's smooth reproduction helps as well.  In all, a recording most easy to live with.