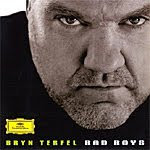 One look at Terfel's mug on the cover and you understand the title of the album, Bad Boys. Sylvester Stallone could have recruited him for The Expendables, and he'd have been right at home with Jason Statham, Jet Li, Mickey Rourke, Dolph Lundgren, Eric Roberts, Randy Couture, Steve Austin, Bruce Willis, Arnold Schwarzenegger, Danny Trejo, and the rest.

Most music lovers recognize and love the Welsh bass-baritone Bryon Terfel for his many stage roles and dozens of recordings over the past several decades. Since he often sings the parts of tough guys or villains, it must have been a natural for him to record this album of nefarious opera characters, with conductor Paul Daniel and the Swedish Radio Symphony Orchestra in April of 2009. I imagine it must have been fun for him, too.

The disc begins with Terfel as Satan himself in Arrigo Boito's Mefistofele. Later in the program Terfel shows up again as Mephistopheles in Charles Gounod's Faust. So you can't say he shies away from the most diabolical characters in musical literature.

Augmenting the more-traditional opera parts, Terfel takes on several additional musical villains like the ghost Roderic in Gilbert and Sullivan's Rudigore, the relentless policemen Javert in Claude-Michel Schonberg's Les Miserables, and the murderous Mack the Knife in Kurt Weill's Die Dreigroschenper. If any one of the characters comes up a little less persuasively, it's Terfel's Sportin' Life from George Gershwin's Porgy and Bess, but the singer more than makes up for it with an outstanding Sweeney Todd from Stephen Sondheim's musical of the same name (featuring a cameo by Anne Sofie von Otter).

Terfel hasn't just a good voice, he's a good dramatic actor as well, and he seems to relish these roles as heavies, investing them with some seriously venomous evil. Indeed, he is equally at home in Mozart or Rossini as in Sullivan or Sondheim. Listening to him in a complete opera might be more appealing in the long run, but these bits and pieces are enjoyable enough.

The DG audio engineers place Terfel center stage (except in a few notable instances), with the orchestra well spread out behind and around him. The voice, while clear and clean, is never too big, hard, or edgy but perfectly smooth and natural. The orchestral sound comes through with admirable but never overpowering dynamics, a reasonable degree of clarity, and a few solid bass wallops.