Anna Netrebko: In the Still of Night (CD review) 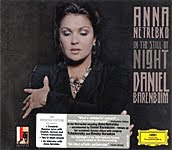 Russian soprano Anna Netrebko is one of today's reigning stars of the opera world. She certainly must be doing something right because this current album of largely Russian songs, In the Still of Night, marks something like the twentieth-plus compact disc the folks at DG have released of her singing. Not only that, she has celebrated pianist and conductor Daniel Barenboim accompanying her.

What's even more, DG have given the album a most royal treatment. The single disc comes housed not in an ordinary jewel box but in a special, superdeluxe CD book, with a fifty-odd page insert bound between hard covers, the disc itself sliding into a stiff cardboard sleeve attached near the rear of the case. The package is the size and thickness of a regular CD jewel box but is much more elaborate. And more costly.

In the recital, Ms. Netrebko sings primarily songs by Nikolay Rimsky-Korsakov (1844-1900) and Pyotr Ilyich Tchaikovsky (1840-1893), twenty of them altogether. Then, to conclude the program, she sings two encores, Antonin Dvorak's Songs My Mother Taught Me, Op. 55, No. 4, and Richard Strauss's Cacilie, Op. 27, No. 2. The complete album lasts well over an hour.

As always, Ms. Netrebko sings radiantly, elegantly, investing each song with an appropriate degree of intensity, drama, and passion. Yet there is an extra poignancy, too, in the songs themselves. They have a bittersweet character about them, Ms. Netrebko explaining that they represent the Russian soul, which knows melancholy. Certainly, Daniel Barenboim accompanies her most eloquently on piano, the two of them making a fine team effort of the works. This is music of high Romanticism, and the performers' attitudes and performances reflect the generally high quality of the pieces.

DG recorded the recital live at the Salzburg Festival in August, 2009, where by all accounts Netrebko and Barenboim were smash hits. The audio engineers place the piano and voice somewhat to the left of center, which may help replicate the live experience but seems a little disconcerting for home listening. The voice rings true, with little or no edge or hardness, while the piano exhibits a pleasantly resonant bloom, also representative of a live performance. The audience, in the meantime, behaves itself, remaining fairly quiet during the songs (indeed, seemingly giving the performers their rapt attention), although their applause after every piece becomes a bit disruptive and annoying after a while.

The extensive booklet, by the way, contains black-and-white and color pictures of the Salzburg event and its participants, several essays on the music and composers involved, an interview with Ms. Netrebko, and the full text of each of the songs. As I say, it's an extraordinarily fancy affair.