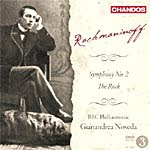 Time was, conductors routinely cut Rachmaninov's Symphony No. 2, finding it too unwieldy, too rambling, too lengthy for audiences to sit through, or too extended to fit comfortably on 78 rpm records. Even the composer's friend, conductor Eugene Ormandy, who championed the work, sometimes failed to take all the repeats.

But we are long past those days. Today, music lovers prize truthfulness, with period instruments, authentic playing styles, and fidelity to the source a united goal. Thus it is with this new Chandos recording of the Second Symphony conducted by Gianandrea Noseda and his BBC Philharmonic. He plays it complete, at over an hour in length, and the music is the better for it.

The opening segment of the Symphony is one long, languorous slow movement, establishing the Romantic nature of the work. Noseda takes the big themes broadly, playing up their luxuriant textures but never over-sentimentalizing them. The music is dark, to be sure, yet under Noseda's guidance it unfolds charmingly, beautifully, too. Still, even he has a hard time sustaining our attention for so prolonged a period.

The second-movement Scherzo finds Noseda and his forces properly animated, a wake-up call after the unhurried first movement. Here, Noseda becomes most persuasive in the central motif, lush and sensuous without being too melodramatic.

By the third movement Adagio Rachmaninov is in his element, with Noseda ensuring that the big love theme that launches it is not too flowery or mushy, mitigating some of the composer's emotional excesses. Then, the Finale wraps things up nicely in a rambunctious manner before settling back into the Symphony's darker moods. It is here, actually, that Noseda is at his best, his most involved, closing the show in high spirits.

Although Noseda's may not be quite as passionately intense an interpretation of the Second Symphony as those of Previn (EMI), Pletnev (DG), and others, it is a warmly intelligent, clearheaded reading that tends to meet one on common ground.

The Rock, which begins the program, is an early, drawn-out tone poem Rachmaninov based on several possible sources that may no longer matter. I continue to find it rather vague and lugubrious, no matter who's conducting it.

The Chandos sound is pleasant: very clear, very clean, very robust. While orchestral depth is only moderate and sometimes downright two-dimensional, there is a sweet ambient bloom around the music, a wide stereo spread, and a vivid though never forward sense of presence. The strings are particularly natural sounding, and the orchestra has appropriate heft, with several notably solid bass whacks.