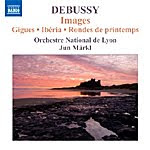 I must admit I didn't care all that much for maestro Jun Markl's previous album of Debussy orchestral works, which included La Mer and Prelude a l'apres-midi d'un faune (Naxos 8.570759). Perhaps it was because he had so much competition in that repertoire, it was hard for me to find a foothold for him. I don't know. However, I enjoyed this third Debussy volume slightly more than I liked that first one (I missed the second disc of Nocturnes), and certainly at its budget price the potential buyer must consider it at least a contender in this repertoire.

Listening to Volume 3 in Markl's Debussy series also makes me wonder how much a person's mood affects his or her appreciation for music when listening to it. I mean, if you're in a happy, grumpy, or sad state of mind, it can't help but influence your disposition toward any piece of music. That said, I'd hate to think I did Markl any disservice when I listened to his first Debussy disc; I don't think I did, because I still never felt this third set fully lit up the room for me, and I was feeling pretty good when I listened to it.

In any case, Claude Debussy (1862-1918) was a master impressionist, creating musical tone poems that never fail to evoke colorful musical paintings in the mind. The central selection here is the composer's Images for Orchestra (1909-12), most of which he initially intended as another solo piano piece, as the Images I and II had been. We hear in the five movements of the Images for Orchestra suggestions of English, Spanish, and French influences. The opening Gigues are English in character, the three-part Iberia Spanish, and the final Rondes de printemps a picture of France. The suite demonstrates a definitely international flair, and Markl does his best to bring out these nationalistic tendencies. He is at his best, though, in the delicate Les parfums de la nuit, where one can almost smell the scents of the night air.

Markl and his Orchestre National de Lyon play the other short pieces on the album--originally piano works, later orchestrated--in an equally nuanced fashion. Nevertheless, these are solid, serviceable interpretations rather than particularly distinguished or inspired ones such as those of, say, Jean Martinon (EMI), Geoffrey Simon (Cala), Bernard Haitink (Philips), or, best of all in the Images, Ataulfo Argenta (Decca). Where Markl scores is in the poetic segments, as the more lyrical interludes in the music demonstrate, especially the program's closing number, La plus que lente, an odd, parodic little waltz.

The Naxos sound, recorded in 2008, is somewhat soft and lightweight, yet it is clear enough, replicating a fairly realistic performance heard from a moderate listening position. You won't find the kind of concert-hall bloom here so pleasing in Haitink's Concertgebouw Debussy recordings (available in a Philips Duo at mid price), nor a lot of depth to the orchestral stage, nor much ultimate definition or transparency. However, the recording's clarity and wide stereo spread help make up for any minor deficiencies.