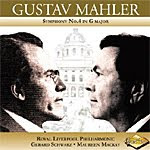 The Fourth Symphony of Gustav Mahler (1860-1911) is today probably the composer's most-popular symphony, and, thanks to a revival of the composer's work in the Fifties and Sixties, one of the world's most-popular pieces of classical music. One can understand why: Along with the First, it's the shortest of the symphonies Mahler wrote (even though it's about an hour long); it's scored lightly, making for a most-transparent sound; and it features some lovely, lilting melodies envisioning Man's glimpses of heaven. How can it miss?

Under Maestro Gerard Schwarz, the first movement is sweet and lyrical, with a pleasantly flowing gait, even though the conductor tends to speed up and slow down more suddenly than he needs to. This more-than-flexible rubato, combined with Schwarz creating some pronounced dynamic contrasts, adds a degree of admitted excitement to the proceedings, but one could argue that the music doesn't really need it. Mahler's markings indicate "deliberate and leisurely," and the movement should convey a feeling of simplicity, which Schwarz misses to some small degree.

In the second movement, also marked with "leisurely motion," Schwarz takes Mahler more at his word. It's not a particularly big change of tempo from the preceding movement, but the tone changes considerably. It's now more shrill, introducing us to death and the devil. Mahler never meant the music to be scary, just a little odd, and it's here that Schwarz is at his best, molding a slightly sinister yet reassuring mood.

The third movement Adagio, marked "peacefully," is among Mahler's most heartfelt, yet Schwarz draws it out perhaps more than necessary, overly relying on the sentimentality of the piece.

Then, we come to the fourth and final movement, a vision of heaven as expressed in one of Mahler's favorite folk poems from the collection Des Knaben Wunderhorn ("The Child's Wonderful Horn," or cornucopia of plenty). Soprano Maureen McKay sings the youth's part most affectively, with, in the composer's words, "childlike, serene expression, always without parody"; and Schwarz brings the symphony to a joyous conclusion. My only quibble here is that the recurring sleigh bells, returning from the first movement, burst forth rather vigorously and tend to distract from the serenity of the music.

Artek recorded the sound live at Philharmonic Hall, Liverpool, and although I have never been too keen on live recordings, this one is quite good, with an especially nice sense of orchestral depth. Be aware, however, that the engineers miked the orchestra at a moderate distance, a little more distant than they would have miked the group in a studio, resulting in an occasionally recessed sound.

Thankfully, there is very little audience noise involved, with the exception of a few strange thumps and bumps in the background. The recording also displays a wide stereo spread and fairly clean delineation. A final quibble, though: The orchestra tends at times almost to swamp the soloist in the final movement.

For me Schwarz fills his performance of the Mahler Fourth with a few too many flourishes and overstatements. While the reading is certainly lively and vital, it does not persuade me that this is how Mahler intended his symphony to sound. I prefer the more straightforward approaches of Bernard Haitink in his second, analogue Concertgebouw recording (Philips) and George Szell in his Cleveland rendition (Sony).