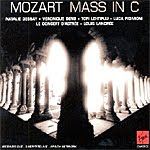 The Mass in C minor is another liturgical work that Mozart didn't finish. You can understand his not finishing the Requiem; he died. But it is unclear why in the Mass in C, written some eight years before his death, he only completed the "Kyrie," the "Gloria," and parts of the "Credo," "Sanctus," and "Benedictus."

In any case, conductor Louis Langree says that of the many editions of the Mass completed by other people, he was satisfied with none, so he did his own completion, which we have here. I'm sure it is as good as any. Langree's orchestra is relatively small, around forty players, probably about the size that would have performed in Mozart's day, and his soloists and choir are top notch.

Mozart's Mass in C minor is more operatic than we might expect from a church piece, and it lends itself nicely to repeat listening, grand and imposing on the one hand, intimate and touching on the other. However, Langree does take many segments of the work at a rather fast pace, diminishing somewhat the overall drama of the music and substituting for it a more fleeting kind of excitement. His interpretation certainly has its thrilling moments, but with alternative readings by Gardiner (Philips), Herrewighe (Harmonia Mundi), and others, I'm not sure I would want it as my only account.

The 2006 Virgin recording, made in Paris, is warm and smooth but with little or no sense of presence. A quick comparison to Philippe Herrewighe's 1992 French recording reveals the Herrewighe rendering sounding more detailed, more dimensional, more natural, and more realistic, although a touch edgier at the high end. While I doubt that anyone would object to the Virgin sonics on the Langree recording, I prefer a better sense of occasion.