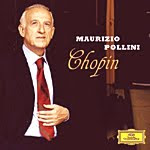 I mean, who would you rather listen to playing the music of Frederic Chopin (1810-1849) than Maurizio Pollini? He made his EMI recording of the First Piano Concerto over half a century ago, and the disc is still the best value for performance and sound you can buy. In the 1970's, he began recording for DG, and now they have compiled a program of some of his best Chopin, dating from 1972 to 2008.

Things begin with three Etudes, Nos. 10, 11, and 12, from Op. 25, recorded in 1972.  No. 10 has a rather noisy opening section before settling in to a sweet little central theme. No. 11 reminds one of a winter storm, and, appropriately, silent-movie houses often used it as such. No. 12 is largely melodramatic and repetitious, but it has a wonderfully grandiose quality to it. Pollini, of course, is dazzling throughout, whether he's on a rampaging tear or taking the most serene and leisurely stroll.

Next, recorded in 2008, we find three Waltzes, Nos. 1-3, op 34, which is where Chopin was sublime, and Pollini is positively sparkling. Age has obviously not dampened Pollini's virtuosity, his high good spirits, or his affection for Chopin's music. These three waltzes are basically of a fast, slow, fast nature, the trio of them working structurally well as a whole.

After the Waltzes is the Ballade No. 4, recorded in 1999, beginning gently, questioningly, until its increasing dynamism culminates in a ferocious climax. Following that are three Polonaises, recorded in 1975, including my favorite, the stately and imaginative Polonaise in A flat major, op. 53. When I was a youngster I almost asked my parents to get me piano lessons just so I could play it. Never happened. Shortly after my initial enthusiasm, I heard Van Cliburn play it, and I knew I could never compete. Pollini is almost as good as Cliburn in the work, maybe better depending on your point of view.

The recital ends with the Scherzo No. 2 in B flat minor, op. 31, which Pollini recorded in 1990. It's seriously playful, exciting, lyrical, poetic, and graceful by turns, with the pianist never missing a nuance.

There is a surprising uniformity of sound among the various pieces, despite their recording dates. The latest recordings display perhaps a touch more clarity, solidity, and impact, but for that matter they all come across fine. The piano is resonant and full, with a pleasant ambient bloom surrounding the instrument. Moreover, the piano itself never appears too wide or too distant but always pretty much in the room with the listener. It's hard to knock any part of this collection.