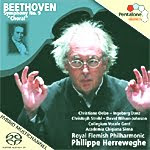 For many years one of my favorite recordings of this work has been Eugen Jochum's Concertgebouw rendering (Philips/Belart) from the late Sixties. Full of spark and enthusiasm for the music, Jochum didn't so much play the piece as attack it in a spacious yet dynamic performance. I mention this because Philippe Herreweghe's new interpretation of Beethoven's Ninth Symphony shares some of that energy, at least in the first three-quarters of the work. Had he maintained this gait through to the finish, he might have displaced Jochum among my preferred Ninths rather than becoming simply another good interpretation on my shelf.

At the time Beethoven premiered the symphony in 1824, his fans apparently felt some anxiety about it. After all, everyone knew the composer had gone completely deaf by then; he hadn't produced a symphony in some ten years; and there was that unusual business of the soloists and chorus hanging about in the background. The audience was understandably on edge, but the symphony was, of course, a resounding success, as it has been ever since, its excitement and politics making it the crown jewel among the composer's output.

In the opening Allegro Herreweghe provides a wonderfully animated pace, setting the tone for what's to come and maintaining an appropriately steady, incremental buildup to the drama on hand. The Scherzo that follows shows a similar liveliness, although it doesn't quite catch fire as it might. Instead, Herreweghe displays a graceful lyricism despite the quick speeds that modern conductors now feel were Beethoven's intention.

The slow third-movement Adagio provides a breather, a respite from the tensions of the preceding segments. Yet, to be fair, under Herreweghe it isn't the sudden calm it sometimes is but a well-coordinated part of the music's organic whole, flowing naturally from the quicker tempos of the Molto vivace before it. Yes, there is much method in Herreweghe's direction.

Then we reach the movement we've been waiting for, the big, lengthy, glorious Finale, which Herreweghe plays with unexpected reserve. He still manages to achieve a somewhat grand effect, yet it isn't quite the grandiose upshot we were anticipating. As before, the conductor chooses to take most of the brisk tempos Beethoven indicates but without appearing hurried or hectic. The result is a decidedly heroic yet relaxed Ninth, more elegant than it is athletic. Frankly, though, I was hoping for the latter because Herreweghe's reading never moved me the way Jochum's always has. So maybe this whole business of music making has more black magic in it than we like to believe.

The PentaTone audio engineers capture the sonics on a hybrid SACD, with a regular stereo layer for playback on an ordinary CD player and a multichannel layer for stereo or multichannel Super Analogue playback.  Listening in stereo, the 2009 recording sounded fine, with a reasonably good depth of field, well-integrated vocals, and ultrasmooth yet lifelike reproduction. While the sound hasn't the deepest bass, it does have a solid foundation, with realistic imaging and a superb timpani attack. There are no traces of hardness here, edginess, brightness, forwardness, or other such distractions. Miked at a moderate distance the disc provides a warm, truthful presentation, even if, like the performance, it doesn't exactly set the blood to racing.