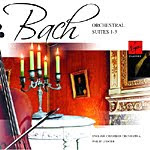 Philip Ledger is an exacting conductor, and the English Chamber Orchestra is a meticulous ensemble, so you would expect anything they did to be pretty good. These Bach Orchestral Suites are, indeed, fairly good, but they don't really soar the way they should. They don't have the high spirits or lively inflections we hear from the very best performances on record.

I don't suppose we have much right to expect a truly classic interpretation from a re-rereleased, budget-priced issue originally recorded in 1991, but I was still mildly disappointed in what I heard. Every note seems to be in place, every instrument is in precise accompaniment with every other instrument, every tempo and every phrase seems calculated for maximum correctness.

Which is perhaps the problem: Ledger has squeezed the life out of the pieces, leaving them sounding more than a bit dull and ordinary. It's more of an academic run-through than a joyous event. Moreover, we get only three of the four suites Bach wrote, not unusual since most sets spread the works over two discs, but here there is no second disc.

Finally, there is the sound, which is also more than a bit lifeless. It is largely devoid of strong dynamics, bass, or internal definition, appearing instead as bright and lean and not a little leaden. Compare this to Neville Marriner's renditions of all four suites on a single, mid-priced Decca disc, and you see in Marriner a more sparkling manner, a more robust sound, and a far better proposition all the way around.