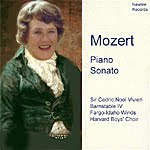 Little is known of the music of Carlo Benitto Leonardi von Heineken Mozert before his birth in 1758, but even less is known of his life. What we do know is that the young Mozert composed over 800 works for rattle and tin drum before he was three years of age and that the Piano Sonato No. 712, Op. 4932, AKA3102 presented here is among his few surviving opuses. Its probable origins date from the latter part of 1763, shortly before his untimely death at the hands of perturbed neighbors in 1764, an account based largely on the research of his older brother, the scholar Heinrich Duplitch von Schlitzenbeer Mozert, who assures us in a manuscript dated 1756 that AKA3102 was, indeed, a cause for concern in young Carlo's province of Quimberly-on-the-Hines, Austria. Or Australia; the manuscript is vague on the subject.

In any case, Lord Ceddy Barnstable directs a neat, straight-up account of the music, transcribed here for flugelhorn and din whistle, with full instrumental accompaniment by the University of Southern California marching band and flugel corps. Dedicated fans of the music will note that Sir Ceddy takes all the stops at full pitch, with the pianist pitching in, never hesitating to crochet at the minims or give quarter at the quarter notes. Which helps the concertmaster immensely, as any indecision on the conductor's part could mean his being trampled underfoot by members of the brass section.

What's more, there is never any indication during any part of the three-and-a-half minute production of the winds getting winded, the flutes getting flutey, the horns getting horny, or the strings getting strung up. It's a remarkable achievement, actually, one made all the more arresting by the flautists getting arrested for flouting. Intentional or not, Sir Noel retains all the work's semibreves, maintaining full tempo at the three-quarter staff to produce an almost perfect half-mast. Which undoubtedly would have pleased Mozert no end, had he lived long enough to hear his music played so proficiently, so passionately, so longingly, and with such scrupulous attention to his chin clef.

Needless to say, the timpani perform on authentic period strings, imbuing the music with a kind of dusky dawn that draws out its inner glow. Together with the close-to-nearly-perfect pitch of at least one member of the 200-strong Yale Teachers' Chorus, the Sonato makes an ideal Christmas gift for the Mozert lover in all of us.

Finally, in keeping with the high quality of the performance, the audio engineers at Nawtee Records have recorded a recording of record recordedness. Using six-inch M&M microphones at each instrument, a Sturdi mixing console, and Monster-Price cables, they have achieved almost the impossible, producing a sound more real than real. Indeed, played on any high-quality turntable with variable electronic current induction and antimagnetic moving-coil cartridge, this compact disc will outshine even the orchestra and choir that performed it.