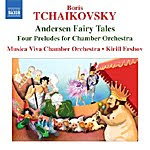 No, not that Tchaikovsky. This is Moscow-born composer Boris Tchaikovsky (1925-1996), no direct relation to his more-famous namesake. Boris Tchaikovsky came to prominence in the 1950's, just after the death of Stalin but still under the rigid constraints of Communist musical censorship. This album of some of the composer's lighter music shows us his most charming qualities.

When I say "lighter" music I do not mean that to imply any disparagement. Tchaikovsky never intended for the music represented here to be entirely weighty or profound, just simple, straightforward, engaging, and relaxing. It succeeds admirably in these regards.

The program begins with the most substantial of the music, his Four Preludes for Chamber Orchestra (1984). The Preludes began life in 1965 as vocal settings for texts by the Nobel Prize-winning poet Joseph Brodsky, whom the U.S.S.R. eventually expelled in 1972. As a result of the government's condemnation of Brodsky, the songs never saw the light of day, the Soviet government banning them before anyone could perform them. So Tchaikovsky took an alternative approach; he scored them for chamber orchestra alone, taking pride in not changing a single note. They are fine examples of modern tone painting.

The other items on the program are three suites of fairy-tale music Tchaikovsky wrote for radio shows in the 1950's. Both the composer and the world regrettably forgot them, and it was only through the efforts of the Boris Tchaikovsky Society that they were recovered in 2003, after the composer's death. They are receiving their world-première recordings on this disc, so it's beneficial that we find them so well performed and well recorded.

The Swineherd (1954), Andersen Fairy Tales (1955-56), and Galoshes of Fortune (1958) are collections of brief tone poems every bit as descriptive as their names suggest. They are sweet, clever, delightful, lyrical, sparkling, delicate, comical, fanciful, and familiar. They remind one of Prokofiev's music for Peter and the Wolf or the music accompanying Disney's old Silly Symphonies cartoons, with a little Offenbach thrown in for spice.

I have never heard much of Boris Tchaikovsky's music before (although this is the fourth Naxos recording of his work), and I've heard none of the pieces on this disc, so I have nothing with which to compare them. However, I certainly have no objection to the way conductor Kirill Ershov and Moscow's Musica Viva Chamber Orchestra play them. They exhibit an abundance of vigor, enthusiasm, and obvious affection for the tunes, and they aren't afraid to play them as serious music, never condescendingly.

If there is a snag to any part of the program, it's that each piece of music is quite short, the suites segmented with four or nine or fourteen movements each and nothing lasting more than a few minutes, often less. As soon as something begins, it ends. Alas, that is the nature of stage, film, and radio work, I suppose.

No snags with the Naxos sonics, though, unless you don't care for recordings miked close up. The Musica Viva Chamber Orchestra are a very small ensemble, the accompanying booklet noting about a dozen players, so their sound would be quite transparent in any case. Nevertheless, recorded fairly close up, the result provides some pinpoint accuracy. This is decidedly not a concert-hall performance but a superclean studio production. You get front-row seats to the proceedings, with plenty of dynamic impact and a wide frequency range. In particular, the disc's extreme clarity makes for an impressive reproduction of percussives. In sum, we get entertaining music and entertaining sound. Nice package.

Email ThisBlogThis!Share to TwitterShare to FacebookShare to Pinterest
Labels: Tchaikovsky.Boris