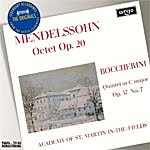 Most often the reissues from major studios are self-recommending, especially when they appear in series like EMI's "Great Recordings of the Century" or DG and Decca's "Originals." Such is the case here with the Mendelssohn Octet for Strings, Op. 20, played by members of the Academy of St. Martin in the Fields.

The very fact that Decca-Argo recorded it in 1968 and originally released it on the Argo label should be enough to induce music fans to buy it. It was a golden age and a golden label for great recordings.

One of the remarkable things about the Octet is that Felix Mendelssohn (1809-1847) wrote it in 1825, when he was only sixteen years old, yet it is still one of his most-popular compositions.  Not that this should surprise anybody; while in his teens he wrote a slew of sonatas, quartets, songs, and such, including the Overture to A Midsummer Night's Dream the year after the Octet, and the Overture, too, remains among the most-popular pieces of music in the world.

Hugh Maguire, Neville Marriner, Iona Brown, and Trevor Connah on violins, Stephen Shingles and Kenneth Essex on violas, and Kenneth Heath and Denis Vigay on cellos perform the Octet. They play immaculately, yet they play with such affection for the music, you'd think they were born to it. There is nothing stodgy here; the performance is light, graceful, spirited, and invigorating by turns. Like its companion piece on the disc, the Boccherini Quintet in C major, it is a total delight.

It's hard not to love this album.