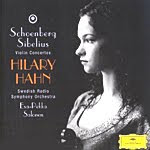 Is there anything Hilary Hahn can't handle with confidence? The Schoenberg Violin Concerto (1935) seemed so formidable when the composer wrote it that no less an artist than Jascha Heifetz initially refused to attempt it, saying a person would have to grow a sixth finger to play it. Indeed, the piece has never really caught on, and you'll find very few recordings of it. So, give Ms. Hahn credit for including the work along with Sibelius's far more-popular violin concerto.

The Schoenberg Concerto is at once modern, with harmonies and melodies going all over the place in rough juxtaposition, yet firmly rooted in the Romantic tradition in its customary three-movement configuration. Still, in Ms. Hahn's thoroughly doting and understanding hands, it comes off as quite accessible and, remarkably, as a concentrated whole rather than as a series of awkward gimmicks.

Ms. Hahn's handling of the Sibelius Violin Concerto (1905), too, is quite accomplished, although in this case so many other performers have recorded Sibelius's youthful work, with its dark, brooding opening, its meditative slow movement, and its vigorous finale, that Hahn's interpretation seems like just another contender. While it is a persuasive contender, to be sure, she has a lot of competition here, so it's probably not a first choice.

Deutsche Grammophon's audio is much as we have come to expect from this source. The DG engineers always seem to capture the sound of a solo instrument with great precision, and the violin has a strikingly vivid presence. Moreover, the dynamic range and impact are equally strong. Yet the overall orchestral accompaniment seems a bit too big and woolly by comparison and tends to stand out as slightly incongruous.

Email ThisBlogThis!Share to TwitterShare to FacebookShare to Pinterest
Labels: Schoenberg