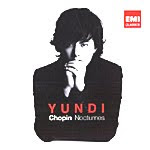 Pianist Yundi is a Chinese musical prodigy, who in 2000 became the youngest person ever to win the International Frederic Chopin Competition. After making several recordings with DG, this is his first release with EMI, the complete Chopin Nocturnes, including the three posthumous titles.

A few questions, though, before we begin: How is it that China produces so many talented young musicians? They surely must put a lot more stock in serious music than America does. And the musicians are always such attractive people, making for handsome album covers; it can't hurt sales. Second, why do so many artists insist on using only a single name?  It seems a pretentious affectation to me: Liberace, Cher, and the like. At least violinist Nigel Kennedy has seen the light and gone back to using his full name, all the better for it. OK, maybe Yundi is now using only the one name on the advice of his publicist or his new record company. Li Yundi (or Yundi Li) still sounds better to me, it's just as distinctive, and it's just as easy to remember. Finally, on the disc cover is it really necessary for a record company to place the performer's name above the composer's in letters three times as big? I dunno.

Anyway, Frederic Chopin (1810-1849) wrote his twenty-one Nocturnes over a period of some twenty years, and while he didn't invent the form, he certainly popularized it. Since Chopin's day, audiences tend to associate the composer's name with the genre probably more than anyone else's. And since the Nocturnes have such a prestigious reputation, it must have been something of a daunting decision for a young man in his twenties to attempt recording all of them. The question, then, is whether Yundi's interpretations measure up to the recorded work of older, more-established artists like Arthur Rubinstein, Ivan Moravec, Claudio Arrau, Earl Wild, Tamas Vasary, Daniel Barenboim, Maria-Joao Pires, or, more recently, Maurizio Pollini. To put it definitively, yes. And no. Well, maybe.

Yundi exhibits dazzling skill, with a light touch when needed (which is frequently) and a sure hand always. Moreover, his speeds are consistently relaxed, which helps to reinforce the music's dreamy, melancholy, elegiac moods. However, foremost in the Nocturnes the pianist needs to communicate heart, and it is here that a comparison to Pollini's DG set finds Yundi coming up a bit short. While I admired Yundi's virtuosity, the playing did not always move me as Pollini's so often does. Still, this is a highly subjective reaction, and another listener might find Yundi's renditions even more compassionate, meditative, and soulful for their deliberate pacing and frequently sentimental nuances. Certainly, there are more than a few truly heartfelt moments in these realizations, as in the case of Nocturne No. 5 in F sharp (Op. 15, No. 2) or No. 8 in D flat (Op. 27, No. 2).

So, OK, he not yet a Pollini. But I cannot imagine anyone not appreciating the beauty of these readings just the same. I could live with them very easily.

Complementing the performances, EMI's sound displays a slight glow or aura around each note, making them seem all the more nocturnal. It's quite pleasant, actually, and adds to one's enjoyment of the music without ever impairing but, rather, enhancing the clarity of the playing.

In closing, if I had to pick just one favorite Yundi interpretation on this disc, it would be Nocturne No. 10 in A flat (Op. 32, No. 2). In it, the pianist provides everything Chopin requires: concentration, sympathy, dynamism, and, yes, heart. It's a lovely album.