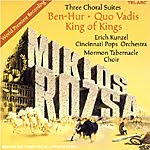 Miklos Rozsa was to film music of the 1940's through 1980's what Max Steiner, Franz Waxman, and Erich Wolfgang Korngold had been even earlier and what John Williams and others have been since. Rozsa, along with fellow composer of the day Dimitri Tiomkin, meant big, really BIG, film music. Epic scores for epic movies. And who better to present such music than Eric Kunzel, the most-popular record conductor of all time, with the Cincinnati Pops Orchestra and the Mormon Tabernacle Choir.

Did I mention "Big"?

The three movie pieces collected on this disc derive from suites that Rozsa began but never finished. They have been arranged and reconstructed by Daniel Robbins, Christopher Palmer, Julian Kershaw, Joseph D. Price, and conductor Kunzel. Each suite lasts about twenty minutes, with the disc containing over an hour of music. The unifying elements are Christ, Christianity, and the Roman Empire, with all of the music conveying pictorial variations of those central ideas.

Things start off with director William Wyler's Ben-Hur, subtitled "A Tale of the Christ," starring Charlton Heston, Jack Hawkins, and Stephen Boyd, and released in 1959. It won Academy Awards for just about everything that year, including Best Music for Rozsa. It's probably the finest of the three scores represented here, with "The Parade of the Charioteers" the highlight. Next is Mervyn LeRoy's Quo Vadis?, starring Robert Taylor and Deborah Kerr, released in 1951.  The Academy nominated it for quite a few Oscars, including music, but didn't win any. The music doesn't have quite the grand sweep of Ben-Hur, but the "Assyrian Dance" is most colorful. Things wrap up with director Nicholas Ray's much-underrated King of Kings, starring Jeffrey Hunter, released in 1961. It contains the best single motif in its musical argument, a theme still almost instantly recognizable.

Needless to say, old-hand Kunzel brings everything off in the most lofty and imposing manner, with the Tabernacle Choir lending solemn and mellifluous support. The sound is pretty much what we have come to expect from this source; I mean, Kunzel has made about 800 such recordings now for Telarc, so all the folks involved should know what they're doing. The sound is big, to match the music; it's wide spread, wide ranging, open, vibrant, deep, resonant, not entirely transparent, but fairly realistic.

I missed El Cid, though. It is my favorite Rozsa score. Oh, well. No Romans, I suppose.

Email ThisBlogThis!Share to TwitterShare to FacebookShare to Pinterest
Labels: Rozsa