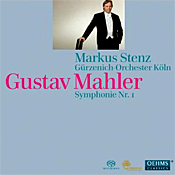 Maestro Markus Stenz and his Cologne Gürzenich Orchestra were in the midst of a complete Mahler symphony cycle when they recorded this First Symphony, and by the look of things, they appear to have the hang of it.

Austrian composer and conductor Gustav Mahler (1860-1911) completed his Symphony No. 1 in D major in 1888, and it was a few years after the composer’s death that fellow Austrian composer Arnold Schonberg suggested that it encapsulated all that Mahler would elaborate upon in his later music. Mahler said he was trying to describe in the work a progression of his protagonist facing life from the lighter moments of youth to the darker years of maturity. Indeed, Mahler initially didn’t even want to call it a symphony but rather a tone poem, giving each movement a title it was so programmatic.

Anyway, the first movement, “Spring without End,” characterizes youth in the symbolic awakening of Nature from a long spring. Stenz evokes the mists of dawn quite well, never pushing too hard. Then as he is developing the whole youth vs. the vicissitudes of life business in properly dramatic fashion, we find Stenz handling things gently, too, with a nicely relaxed feeling, never pushing headlong into a rush.

In the second movement Scherzo, “With Full Sail,” Mahler is in one of his early mock-sentimental moods, displaying an exuberance that he may or may not have meant to be ironic. Stenz keeps it that way, although perhaps takes it a tad too dreamily, even if his pace is relatively quick.

The third movement, an intentionally awkward funeral march, depicts a hunter’s fairy-tale burial, and it comes off as a sort of typical Mahler parody. It may be the young man of the narrative’s first glimpse of death, possibly a recollection by Mahler of one of his own youthful encounters with the death of a loved one. Stenz’s way with it is maybe a touch too superficial, but it still carries weight after its own bizarre Mahlerian fashion. 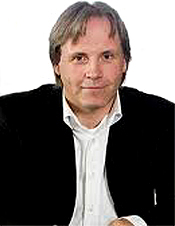 In the finale, Mahler conveys the panic “of a deeply wounded heart,” as the central figure faces the suffering of life and fate. Nevertheless, Mahler, ever the spiritual optimist, wanted Man to triumph in the end, even though how Man will succeed is open to question. Here, in the final twenty minutes, Mahler pulls out all the stops and puts the orchestra into full swing. I have to admit that despite all the energy Stenz and his players invest in this last segment, I would have liked hearing more individual expressiveness from them. Instead, while their music-making is undoubtedly exciting, it never seems to catch fire the way the performances of Solti (Decca), Mackerras (EMI), Horenstein (Unicorn), Bernstein (DG), and others do.

So what we get from Stenz is a robust, well-ordered, well-structured First Symphony without quite the insight, introspection, or sheer emotional boldness of the very best interpretations. I have no reservations, however, about saying it’s worth a listen, particularly if you’ve heard and enjoyed Stenz’s previous Mahler symphony recordings.

Made in the Cologne Philharmonic Hall in 2011, the sound of this hybrid stereo/multichannel SACD does a good job capturing the warm, sweet resonance of the acoustic. At the same time, it also appears reasonably clear and natural, with a modest degree of orchestral depth even in the two-channel mode to which I listened through an SACD player. In addition, a fairly taut dynamic impact and modestly deep bass help provide the music a lifelike quality, especially in the SACD layer.