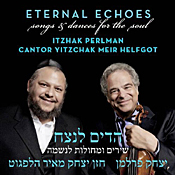 For the past four decades and more, Itzhak Perlman has been among the world’s premiere violinists; for many fans, the world’s greatest violinist. Not only has he recorded practically every violin concerto ever written, he has teamed up over the years with other prominent artists in recordings with Placido Domingo, Luciano Pavarotti, Vladimir Ashkenazy, and Andre Previn, to name a few. This time, he shares the spotlight with Yitzchak Meir Helfgot, Chief Cantor of Manhattan’s Park East Synagogue, and two small, supporting ensembles in an album of Jewish liturgical music that, as with everything he’s done before, makes for glorious listening.

So, what is an album of Jewish liturgical music all about? Let me quote from the album’s coproducer and music supervisor, Hankus Netsky: “It’s part concert music, part improvisation--very ethnic and the culmination of thousands of years of culture. It’s roots music--big-time roots music. It’s Romanian, Ukrainian, Russian and gypsy-influenced folk music with a very strong Jewish accent--as if it’s a Jewish prayer. At the same time, khazones (classic Jewish cantorial music, the traditional music sung by the cantor in Jewish religious services) can be considered Jewish classical music, not European concert classical music by Jewish composers but an art form in the way of tradition that raga is an Indian music. They took their religious liturgy and essentially made love songs to God.” The program insert goes on to say, “Elements of Yiddish folk song and theater music, Hassidic song and prayer, and klezmer music (traditional Jewish folk tunes and bands that play them) all surface within the liturgical canon of Khazones--songs and dances for the soul.”

Both artists, Perlman and Helfgot, show their virtuosic talents to good advantage. Perlman has lost none of the spark, spontaneity, precision, and feeling he has always shown in his music making. And Cantor Helfgot’s voice is simply amazing. It combines all the qualities of Perlman’s violin with the addition of sheer power, rich inflection, remarkable flexibility, and clean tone. The purity of both instruments--Perlman’s violin and Helfgot’s voice--provides a uniquely triumphant duo and one of the most pleasurable, listenable albums of the year. 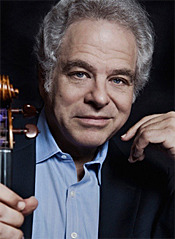 Sony recorded Eternal Voices at Avatar Studios, New York City, in 2011, and it comes with the usual advantages and disadvantages of a typical studio recording. On the plus side, the sound is beautifully clear, rendering the cantor’s voice extremely lifelike and Perlman’s violin crisp and realistic. The engineers recorded both them and the accompaniment rather closely, however, which is why we get such startling clarity but also why the sound doesn’t capture much ambient information. So, as clear as it is, the acoustic isn’t entirely natural, nor do the orchestral ensembles appear too well integrated acoustically, the disc making them seem a bit two-dimensional. In other words, the recording quality is wonderfully lucid at the expense of producing more of a 2-D experience rather than a multidimensional one.

Let me close with only two criticisms, quite minor. First, at a little under an hour of playing time, the disc left me wanting to hear much more. Second, the album cover looks unsightly to me: two faces against a black background with a busy jumble of words across the top and bottom. But who cares about such trivialities when the music is so splendid.