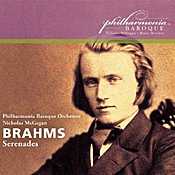 Johannes Brahms (1833-1897) didn’t complete his first symphony until he was around forty-three years old, supposedly because of the intimidating shadow of Beethoven. In the meantime, the closest he came was contenting himself with two Serenades in the late 1850’s (and at least starting a First Symphony, which he finally completed in the 1870’s). No matter; his Serenade No. 1 is still pretty close to a symphony, and it’s the match for any orchestral material the man ever produced, even if it did predate the première of his symphonic output by nearly twenty years.

This was the first time I’d heard the Serenades performed on period instruments, and it is quite a welcome change of pace. My three favorite previous versions have been on modern instruments, versions by Bernard Haitink and the Concertgebouw Orchestra (Philips), Kurt Masur and the Gewandhaus Orchestra (PentaTone), and Istvan Kertesz and the London Symphony Orchestra (Decca). I think now I’ll have to add one more version to my list.

For reasons known only to Maestro Nicholas McGegan and the Philharmonia Baroque, they give us the Serenade No. 2 in A, Op. 16 (1860) first on the program. It is shorter than No. 1, about half its length, slightly darker, and less outgoing; and it has its special appeals, not the least of which is its chamber-music quality in which winds predominate (there are no violins involved).

McGegan’s reading of No. 2 is wonderfully lyrical and relaxed. The mood may be mellower than No. 1 but don’t tell that to the PBO. They play even the slower sections with a joyous enthusiasm. The piece is in five movements, in all of which the orchestra displays a boundless energy, creating a sweet spirit and a resonant atmosphere.

While I’m not sure that playing on period instruments improves the performance all that much, it certainly does nothing to distract from it. Indeed, the distinctive sonic character they produce does add a new flavor to the mix. With performing skills of such a high order and an interpretation so gentle and lovely, the musicians could be playing on penny whistles and make it sound right. The Quasi minuetto in particular has a lilting charm, and the closing Rondo, Allegro has an energetic bounce.

Then comes the Serenade No. 1 in D, Op. 11 (1858), which is alternately gentle, warm, lyrical, and always cheerful. It is a typically youthful work, the composer just in his mid twenties at the time he wrote it. It is also a fairly long work of its kind, close to fifty minutes, yet it is quite delightful, the composer stringing together a seemingly never-ending series of charming melodies.

In No. 1 Brahms was much more youthfully high spirited than he would be in No. 2, especially noticeable in the first movement, which McGegan and his team play with appropriate vigor. Timpani in a period band always punctuate the music in such a commanding manner, and the PBO offer some of the best; that big, familiar opening tune never sounded better. Arranged in six movements, the Serenade No. 1 adds a robust pair of Scherzos to the general design for serenades set forth by Mozart. 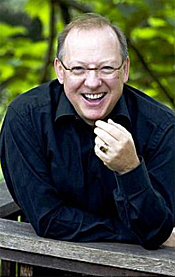 Interestingly, perhaps surprisingly, McGegan adopts some fairly traditional tempos throughout the piece, never resorting to the kind of hell-bent-for-leather approach taken by some other period-instruments ensembles. In fact, the timings for McGegan’s rendering of both Serenades are within seconds, more or less, of the aforementioned conductors, with just a tad more bounce in the step of the PBO. Moreover, the long central Adagio has never seemed more moving or more faintly melancholic. Then, the ensuing Minuetto, Scherzo and finale blend in perfectly with everything that has gone before, bringing the Serenade to a glorious, rousing close.

The recordings come to us from 2010 (No. 1) and 2012 (No. 2), both made live at First Congregational Church, Berkeley, California. First Congregational has always sounded like a fairly lively acoustical venue to me, and in the past, the PBO’s live recordings there have been a bit too brightly reverberant for my taste. However, this time the engineers miked things a little closer and obtained a more flattering response. The sound of the Second Serenade is especially smooth, although neither Serenade appears quite as well detailed and transparent as the PBO’s studio productions. There is a pleasingly warm glow around the instruments in both cases, though, and while orchestral depth suffers somewhat from the close miking, the stage width no doubt benefits, so we get a nice, big sonic picture. Anyway, No. 2 doesn’t really sound “live,” but No. 1, recorded two years earlier, does sound live; one can hear and sense the presence of an audience, chiefly at the beginning of the piece, during the quietest passages, and, of course, during an unfortunate eruption of applause at the end. Still, as I say, the sound is warm and accommodating, not at all bright or excessively reflective, making for an easygoing listening experience.