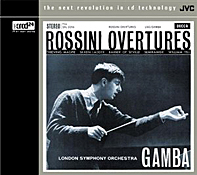 After Victor Company of Japan (JVC) had remastered so many old recordings by Fritz Reiner and the Chicago Symphony, the first thing I wondered when I learned about this JVC release of Rossini overtures was why they had chosen Pierino Gamba’s 1960 recording instead of Reiner’s. After all, Reiner’s performances of six popular Rossini overtures are among the best ever put to disc, sonically and interpretively. Then I listened to Gamba and remembered why they did it.

When Decca first released Gamba’s LP, it went to the top of almost everybody’s charts, later continuing to appear on lists of recommendations from Gramophone magazine, Stereo Review, the Penguin Guide, and many more. Although I hadn’t heard the album in many years, there was no doubt in my mind about its quality less than two minutes into playing it.

Gamba leads performances of overtures from The Thieving Magpie, The Silken Ladder, The Barber of Seville, Semiramide, and William Tell, all of them initially appearing on the Decca label back in the days when Decca engineers were still using a relatively simple trio of Neumann M-50 omnidirectional microphones, with left and right “outrigger” M-50 microphones, plus a Decca pickup for the woodwinds. Gamba’s interpretations are crisp and unfussy, their precision reminding one of Toscanini. While this exactitude does lead to a small degree of coolness compared to the aforementioned Reiner as well as compared to others, like Marriner and the Academy and the Orpheus Chamber Orchestra, it also brings out detail one may never have noticed before in the works. The opening of The Thieving Magpie, for instance, appears to be literally alive right before you; and the closing galop from William Tell is uncanny in its technical proficiency. Yet the whole is as exciting as any Rossini on record, Gamba’s speeds sometimes verging on the breakneck. 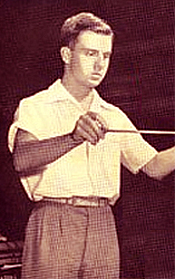 The sound as remastered by JVC is excellent, as we might expect, very clear, very tight. If there is any slight lack of deepest bass, it is undoubtedly because that’s the way Decca recorded it. Nevertheless, what bass is present is taut and dynamic and makes a solid impression. Occasionally, one notices a touch of harshness about the highest strings, but that, too, one can no doubt attribute to the master tape. I cannot imagine it being anything introduced through JVC’s impeccable remastering process, and, in any case, it’s so small it’s hardly noticeable.

These JVC audiophile discs are, as you know, quite expensive, running about $30.00 a pop for no more music than was on the original LP. (I like to think this has to do with getting the maximum in quality regardless of cost). High priced or not, apparently the discs sold well enough for JVC to have mastered them in their Southern California facility as well as in Japan. According to the booklet notes, this Rossini disc was “mastered by Alan Yoshida at Ocean Way Recording, Hollywood, California.” The nice thing about the U.S. manufacturing, incidentally, is that the notes are in English, something you don’t get with the Japanese product. Otherwise, the mastering from both facilities appears to be equally good.