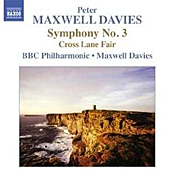 You know Sir Peter Maxwell Davies. Well, if you don’t, you should. As of this writing, the prolific English composer and conductor (b. 1934) is the Master of the Queen’s Music, a title equivalent to the Poet Laureate of the country or the Archbishop of Tunes or something. To be fair, though, I rather suspect the English program his music more than we do in the U.S., so if you’re not quite sure about him or what he’s written, you have cause. Anyway, he’s written nine symphonies so far, and this third one is among the best. It’s good to have the composer’s own recording of it back in circulation from Naxos.

The Symphony No. 3 is big work in four slightly unconventional movements. It begins and ends rather quietly, with sometimes violent turns in between as it conjures up visions of seascapes, rock cliffs, and seabirds. Maxwell Davies suggests that the piece resembles a spiralling mollusk shell. He wrote the music in 1984 “at home in a tiny isolated cottage on a remote island off the north coast of Scotland, on a clifftop overlooking the meeting of the Atlantic Ocean and the North Sea.” To me, the music resembles some things by fellow Englishman Arnold Bax, who also wrote tone poems of nature and the sea, things like Tintagel, Northern Ballad No. 1, and November Woods. Then, too, there is always the Finnish composer Jean Sibelius and his various descriptive, romantic tone poems and symphonies to consider as comparisons.

The composer himself leads the BBC Philharmonic, so we have to presume the interpretation is authoritative. Certainly, the music bespeaks of a rugged individuality of spirit, along with a kind of Debussy La Mer sensibility. Interestingly, Maxwell Davies also inserts a medieval Roman Church chant into the piece; I’m not sure exactly why except perhaps because of some religious connotations equating our lives with the wrath of God and Nature and because the chant variations give the work a pleasing texture.

After the long opening movement, there follow a pair of Scherzos, the second of which somewhat distorts the first. There is a vaguely jazz-inflected tone to these movements, at least part of which describes a flock of nesting seabirds spiraling upwards. The third-movement Allegro vivace introduces us to the final section, a brooding Adagio, even longer than the other sections, that tends to repeat some of the effects of the first movement. 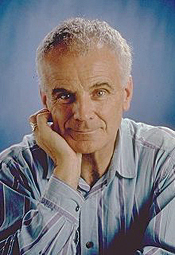 There are some wonderfully evocative feelings and moods expressed in the symphony, although at nearly an hour, it probably overextends its welcome by a good fifteen minutes or more. This was only my second time hearing it, and I couldn’t help thinking again that it would have maybe been better as a shorter tone poem. Yet surely this is a fascinating piece of music, and it’s good to hear so relatively recent a work that hearkens back to the days of actual melody and harmony instead of mere noise.

The brief, quarter-hour accompanying work is a lighter piece called Cross Lane Fair. From 1994 it’s a genuine tone poem that evokes the sights and sounds of a fair the composer recalls from his childhood. Using pipes and bodhran (an Irish frame drum) as soloists with the orchestra, it’s quite a lot of fun.

The sound comes to us originally courtesy of Collins Classics, who recorded it in 1993-94 at BBC North Studio 7, New Broadcasting House, Manchester, UK, and the folks at Naxos re-released it in 2012 along with several other Maxwell Davies discs. It’s among the best-sounding albums I’ve heard from the Naxos group, with a wide stereo spread, a good depth of field, a realistic tonal balance, and a fairly clear midrange.