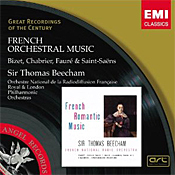 Any Beecham recording remastered in EMI’s “Great Recordings of the Century” series should be self-recommending. This disc is no exception, notwithstanding a few items among the collection being in mono. Beecham was fond of calling short pieces of light music “lollipops,” and this program brims over with them.

Things begin with a suite from Bizet’s Carmen, culled from the orchestral pieces in Beecham’s celebrated 1958 opera recording. The suite bursts with life, zest, vitality, and charm. I don’t believe anybody has ever done the music better, and it sounds as clear and lively in its full-ranging stereo sound as anything done today.

Following that, we find Chabrier’s Gwendoline overture, one of several performances taken from French radio broadcasts and done up in decent but not spectacular monaural. 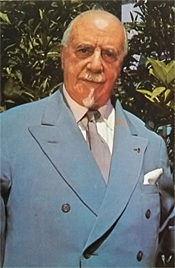 Next is an unexpected treat, an orchestral arrangement of Faure’s Dolly, highlighting excellent 1959 stereo sonics and featuring some totally enchanting and enlivening music; you’ll find a few little gems in here. Then there is Saint-Saens’ Le Ruet d’Omphale; Chabrier’s Joyeuse Marche and Espana, the latter one of Beecham’s biggest-selling earlier records, in mono from 1939; and finally Bizet’s overture from Patrie and “Carnaval” from Roma, both also in mono.

Beecham was a master of this kind of thing. He never failed to delight his listeners when he was alive, and he never fails to do so nowadays, thanks to the marvels of modern technology. Delicious ear candy.