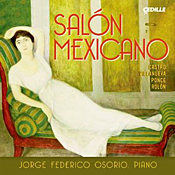 Nowadays, we tend to look askance at “salon music” as a sort of shallow, lowbrow attraction for little old ladies at their afternoon tea. But throughout most of the nineteenth century, back when people didn’t have radios, television, Internet, CD’s, DVD’s, BD’s, or any other D’s at their disposal, they listened to music the old-fashioned way--live. And that meant listening to it in a theater, concert hall, or church for big orchestral or choral works or a living room or drawing room, a “salon,” for many chamber and solo works. The latter, understandably, became a more economical proposition. For example, Chopin and Liszt were but two of the illustrious pianist/composers who found performing in the intimate setting of the salon attractive.

The program begins with the Caprice Vals, Op. 1, by Ricardo Castro (1864-1907). It’s a beautiful, gently flowing waltz that a Viennese composer could as easily have written. Osorio provides a delicate touch and a lightly exaggerated lilt that gives a delightful animation and warmth to the piece. It’s gorgeous. In addition, we get six other pieces by Castro, all of them in a similar vein.

The next composer is Filipe Villanueva (1862-1893), represented first by his Suena Dorado:  Mazurka. There is genuine grace and charm here in a genteel but lively setting. Again, Osorio shows us how a performer can conjure up music that is sweet, refined, and lyrical yet powerful and concentrated at the same time. This is more than mere lightweight entertainment; it’s art. Further down on the program, we get five more such pieces from Villaneueva.

Manuel M. Ponce (1882-1948) follows, the most-recent composer of the lot, with his 8th Mazurca de Salon. The pieces by Ponce, of which there are four, sound like the most seriously “classical” art music on the program. They haven’t got quite the popular appeal of some of the other works on the disc, but they can impart a more lasting impression. As before, Osorio is expressive, nuanced, and singing in his piano playing. 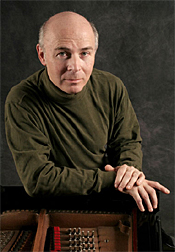 The final piece is the only work on the disc from Jose Rolon (1876-1945), a contemporary of Ponce.  Rolon dedicated his Vals Capricho, Op. 14, to pianist Arthur Rubinstein. Its variations on the familiar tune “Over the Waves” by Mexican composer Juventino Rosas takes flight in a most virtuosic manner and closes the show in high style.

The titles of most of the pieces say it all: sentimental, melancholic, romantic, and poetic. The result is music both soothing and stimulating. Add Osorio’s pianistic command, and it seems to me a winning combination.

This is a recording from audio engineer Bill Maylone, so you know it’s going to be good. Cedille recorded the program in 2012 in the Fay and Daniel Levin Performance Studio of 98.7 WFMT, Chicago, Illinois. The sound is of the reach-out-and-touch-it kind, where if you close your eyes, there is a piano in the room with you. The sonics are clear and clean, miked at a moderately close distance, with strong impact and articulation. It’s one of the best piano recordings you’re likely to hear.