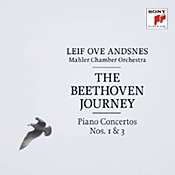 With this 2012 release, Norwegian pianist Leif Ove Andsnes embarks on The Beethoven Journey, as he has titled the album, the first of several that will cover all five of Beethoven’s piano concertos and the Choral Fantasy. Whether he will then go on to do the Triple Concerto and the various sonatas, we’ll have to wait to see. As Andsnes notes in the disc’s accompanying booklet, this is the first time he’s recorded Beethoven at all, and his inspiration to do so was hearing snippets of the concertos playing in an elevator he used regularly. Mr. Andsnes is a fine, thoughtful, clearheaded pianist, and if this initial foray of his into Beethoven as pianist and director of the Mahler Chamber Orchestra is any indication, we can only hope he’ll consider going as far as he can in the repertoire.

As Andsnes also points out in the booklet, there is nothing slight or lightweight about Beethoven’s first couple of piano concertos. In fact, it is only by comparison to the revolutionary ideas in the final few concertos that the early concertos seem of less consequence. Nevertheless, there is much to commend in all five of them.

Beethoven premiered the Piano Concerto No. 1 in C major, Op. 15, in 1798. It is one of my favorite works by the composer, and if it sounds more mature than his Concerto No. 2, it’s because he actually wrote No. 1 some ten years after No. 2. Anyway, here in the Concerto No. 1 we get a big, rhythmic opening movement, a playfully tuneful closing movement, and in between them one of the most tranquil, meditative middle movements a listener could imagine.

I enjoyed the fresh bounce Andsnes maintains in his playing. He certainly takes the first movement briskly, which perhaps diminishes slightly the joy of the music, yet it’s probably more in line with Beethoven’s own Allegro con brio tempo marking than most pianists observe. So, it may be all in what a person has become used to hearing. The playing of both the soloist and the orchestra are friendly and inviting despite the quick pace. Andsnes is able to bring out not only the grandeur in the first movement but the lyricism and turmoil as well.

The Largo is among Beethoven’s most sublime creations, and Andsnes gives it a heartfelt interpretation. Still, the pianist shows no signs of sentimentality, which some listeners will appreciate. Personally, I would rather have heard a little more old-fashioned emotiveness from him, but that’s probably just my age speaking. It’s lovely, really.

The final Rondo, Allegro is rhythmically joyous fun, and Andsnes appears to be having a good time with it. Although it’s maybe not as resilient or melodious as, say, Steven Kovacevich's performance for Philips (still the touchstone in these works), it’s close, and Andsnes’s finger work is astonishing. 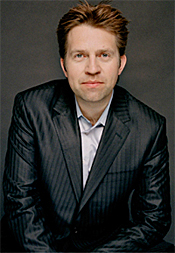 The Piano Concerto No. 3 in C minor, Op. 37, premiered in 1803, with Beethoven as usual the soloist. No. 3 is where a lot critics feel Beethoven found his own voice, and we begin to feel less the influence of Mozart and Haydn. Frankly, I find nothing wrong with those influences, but, yes, Beethoven is more creative here than ever before. The work is darker and more complex than Nos. 1 or 2, which in themselves don’t make No. 3 better, just different. The stricter, somewhat harsher moods Beethoven conjures up in No. 3 seem to suit Andsnes better, though, and he turns in a superb reading, both gravely somber and seductively sweet. While Andsnes fills the piece with a remarkable energy, there is always something just a trifle melancholy and lonely about all three movements.  Well done, sir.

Sony recorded the music at Dvorak Hall, Rudolfinum, Prague, Czechoslovakia, in early 2012. The sound is big (from so small an ensemble), yet it hasn’t quite the transparency or naturalness I’ve heard in a few other recordings. Nor is there much in the way of orchestral depth involved, so the sonic impression is one of relative flatness. However, there is a pleasant ambient glow around the instruments, a mild resonance that goes a long way toward compensating for any possible shortcomings. Moreover, there is a wide dynamic range and a strong impact that aid in overall realism.

A minor quibble: I enjoy nice-looking album covers. I enjoy at least glancing at them once in a while as I’m listening to a piece of music. The Andsnes Beethoven cover is as stark and nondescript as one can imagine; it looks as though someone simply typed the album’s title on a white sheet of paper. Since Sony plans to do more releases in this series, I hope they reconsider the artwork.