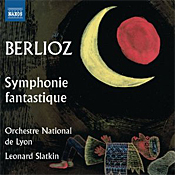 Before we begin, I have to mention again some of my favorite conductors in Symphonie fantastique recordings: Sir Thomas Beecham, Leonard Bernstein, Sir Colin Davis, Leopold Stokowski, John Eliot Gardiner, Sir Roger Norrington, Charles Munch, and Jean Martinon. I mention these names because so well-traveled a warhorse as the Berlioz already has heady competition for any new recording, even when the recording comes from so notable a conductor as Leonard Slatkin.

Now, to the music at hand. The composer, Hector Berlioz (1803-1869), wrote his Symphonie fantastique in 1830, and it wasn’t long before it became one of the most influential pieces of music of all time. With programmatic elements similar to previous works like Vivaldi’s Four Seasons and Beethoven’s Pastoral Symphony and using a huge orchestral arrangement for well over a hundred players (Berlioz employed about 130 musicians for the première), the result must have been extraordinary for its period; indeed, it remains extraordinary even today. It’s not really a traditional symphony despite the title, more like a psychodrama in five movements. Therein, the young Berlioz writes autobiographically of the hopeless love of a young man for a woman, the young man falling into a drug-induced dream, which the composer describes in his music. The woman reappears throughout the Symphonie in the form of an idée fixe, a “fixed idea” the young man cannot shake, a musical innovation Berlioz used to advantage.

As we might expect from Maestro Slatkin, he takes a fairly literal view of things, which in a programmatic work like the Symphonie fantastique may be the best course. He interprets the opening movement at face value, the Reveries--Passions, never quite animating it as much as I’d like but nicely playing up the contrasts as the dejected romantic of the score conjures up opium dreams and nightmares of his lost love.

The second movement describes a ball in which the young man catches a glimpse of his beloved.  Berlioz later composed a cornet part for this section, which Slatkin includes as a bonus track. Anyway, the conductor ensures the music itself sweeps and swirls in an appropriately questioning, probing manner.

Next, we come to the scene in the country, a slow Adagio. In it, the young man sees a pair of shepherd boys playing a pipe melody to call their flock, and all is well until, as always, the young man notices his love in the picture. Needless to say, the music shifts into a left sudden turn, which Slatkin negotiates smoothly, if without too much high drama. 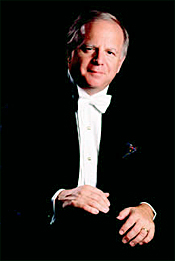 Then we come to the final two movements that audiophiles so adore because they burst over with so much busy, vigorous energy. They’re ideal for showing off one’s audio system. The March to the Scaffold brings the young man to his death for the murder of his beloved, and the Witches’ Sabbath finds the poor fellow apparently at Judgment Day in hell. Beecham and Bernstein generated genuine electricity in these movements; Slatkin merely contents himself with some passing color. I’d rather have felt a little more of the young man’s agony. Still, it’s hard to go wrong in this music, and there remains much one can commend in Slatkin’s low-key characterization. At least he doesn’t let the excitement alone carry the day. It’s also nice to see that Naxos chose to divide the final movement into four separate tracks for an easy indexing of ideas.

Besides the alternative cornet movement, the coupling on the disc is Berlioz’s Overture to Le Corsaire. Here, too, Slatkin’s reading sounds admirably restrained and unaffected, with a dashing élan.

Naxos recorded the music in 2011 at the Auditorium de Lyon, France, to generally good effect. The sound is typical of much of Naxos’s work, perfectly adequate yet never quite reaching audiophile heights. The all-important midrange is refined and natural, if not entirely transparent. The high and low ends appear well enough represented, though not particularly extended except at the very end of the Symphonie. Dynamic range and impact appear a tad limited, so they don’t produce quite the force of an actual orchestral experience. In all, the sonics seem ideally suited to easy listening rather than really critical listening.