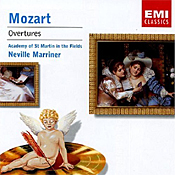 Time is a funny thing. When you’re a kid, you want it to go by in a hurry so you can grow up fast.  When you’re an adult, you’d prefer it slowed down...way, way down. I got to thinking about time when I saw that EMI had re-released Marriner’s Mozart Overtures in their budget-label Encore series.

It seems like only yesterday, 1982, when Marriner first released these performances, and they went straight to the top of my personal favorites. They were the best I had heard, and at the moment they’re still among the best we’ve got. To be able to buy them new for less than the cost of the old full-price LP seems a bargain, indeed. 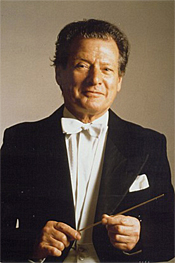 The collection includes nine overtures: The Marriage of Figaro, The Magic Flute, La clemenza di Tito, Lucio Silla, The Abduction from the Seraglio, Don Giovanni, Idomeneo, Cosi fan tutte, and Der Schauspieldirektor. The thing about them is that there is so little one needs to say to describe them. They are not scorching, exciting, tranquil, relaxed, or radiant. They simply “are.” They simply are the way they should be, just as we always imagine this music to sound. Of course, Marriner is always elegant, and the Academy of St. Martin in the Fields is always impeccable; that goes without saying. Otherwise, the performances are spot on, neither hurried nor lax, but glowing when they should be, witty when they should be, inspiring when they should be. It’s no wonder the Saul Zaentz Company chose Marriner to conduct the music for Milos Forman’s Oscar-winning Mozart movie Amadeus a few years later.

EMI’s sound is very early digital, but it was never hard or edgy as some early digital recordings could be. What’s more, the new mastering, which the folks at EMI do not indicate they updated in any way, is as convincing and alive as the old full-price disc. In any case, it’s good to hear this budget release sounds just as clean as the older edition. Understandably, there is little deep bass involved with Mozart, but there is a natural tonal balance, a wide stereo spread, a realistically ambient bloom, and a reasonable orchestral depth, and a modest transparency. It makes for a very fine reissue.