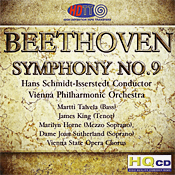 Hans Schmidt-Isserstedt was among those older conductors who, luckily for us, lived long enough into the stereophonic age to have left us any number of fine stereo recordings. He was one of an elite group of conductors that included people like Bruno Walter, Otto Klemperer, Fritz Reiner, Rafael Kubelik, Karl Bohm, Eugene Jochum, and their like. There were other conductors who came along during and after their tenures who offered more glamor, like Herbert von Karajan, or more pizzazz, like Georg Solti, and conductors like Roger Norrington and John Eliot Gardiner who performed on period instruments using period practices. But it’s hard to beat the grace and refinement the older hands brought to the music, especially to Beethoven. On the present disc, the folks at HDTT (High Definition Tape Transfers) bring us Schmidt-Isserstedt’s classic 1965 recording of the Beethoven Ninth, and it couldn’t be better.

Beethoven (1770-1827) wrote and premiered his Symphony No. 9 in D minor, Op. 125, in 1824, and it would be his final completed symphony. Its use of vocals in the final movement gave it the title “Choral Symphony,” and the work proved to be at least as revolutionary as his Symphony No. 3. There are critics to this day who consider the Ninth the greatest piece of music ever written, and it’s hard to argue with them.

We can learn a lot about Schmidt-Isserstedt’s style from his handling of the first movement, the Allegro, ma non troppo, un poco. It sounds exactly right (Schmidt-Isserstedt’s handling, not Beethoven’s tempo markings). To give you an idea of that “rightness,” I compared his timing for the movement with other recordings I had on hand: Solti: 17:39; Jochum: 16:31; Schmidt-Isserstedt: 16:26; Bohm: 14.54; Norrington: 14:13; Zinman: 13:35. So Schmidt-Isserstedt is pretty much in the middle of the crowd when it comes to tempos, yet the pace actually seems quicker because he puts such emphasis on dynamic contrasts, making his interpretation as lively as any of the others. Still, it never seems hurried. In each movement, Schmidt-Isserstedt takes the time to elucidate, illuminate, and clarify every note.

And so it goes, always with Schmidt-Isserstedt keeping a bounce in his step but never overstepping the bounds of classical propriety. His is a thrilling yet elegant performance. The third-movement Cantabile is as beautiful as any I’ve heard, and then comes that big finish: the “Ode to Joy,” based on the poem by Friedrich Schiller and sung here by probably the finest quartet ever assembled for the occasion: Martti Talvela, bass; James King, tenor; Marilyn Horne, mezzo-soprano; and Dame Joan Sutherland, soprano. Along with the Vienna Philharmonic Orchestra, one of the best ensembles in the world, and the Vienna State Opera Chorus at the top of their game, one could not ask for more. 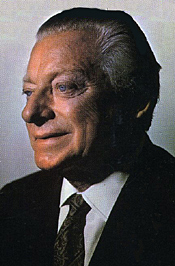 This is not a flashy Ninth, not a monumental one, not a grandiose one, not a zippy, rushed one. Schmidt-Isserstedt’s account is simply a most-fulfilling, most-pleasing, most-rewarding one. It’s a dignified, spacious reading, well balanced and relaxed, yet invariably riveting, a performance that is hard to fault and, thus, a performance easy to live with and easy to enjoy upon repeat listening.

Decca recorded the music in the Sofiensaal, Vienna, in 1965, and HDTT transferred it to HQCD from a London four-track tape. The sound is as good as any Beethoven Ninth on record and better than most. Let’s just say there is nothing seriously better. Clarity is outstanding, without being in any way bright or edgy, and while it may not be as ultimately transparent as some other recordings, it is more lifelike than most. The stereo spread is wide; dynamics are strong; transient response is quick; orchestral depth is moderately good; and bass and treble appear reasonably well extended. A pleasant ambient bloom and almost no background noise give the whole affair a natural, realistic feel. Very nice.

For further information about HDTT discs and downloads, you can check out their Web site at http://www.highdeftapetransfers.com/storefront.php.