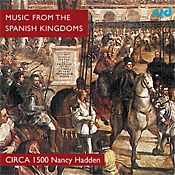 For people who enjoy early music, in this case music of the fifteenth and sixteenth centuries, this reissued CRD album, Music from the Spanish Kingdoms, with the early-music ensemble Circa 1500, is hard to beat. I don’t usually care for programs made up of bits and pieces of music, but this one strikes me as so well played, so well recorded, and so infectiously spirited, it’s hard to resist. Prepare for an hour of truly old-fashioned music making, like four-hundred-year-old music.

Musicologist Tess Knighton in a booklet note describes the music of the disc thus: “Throughout the Middle Ages the rulers of east-coast Spain...had looked across the Mediterranean and longed for a foothold in Italy. It was not, however, until 1442 when Alfonso the Magnanimous (d. 1458) defeated Rene of Anjou, his French rival for the kingdom of Naples, that such ambitions were fulfilled. Alfonso transferred his court to Naples and it automatically became a meeting-point for Hispanic and Italian culture; and from this time, sometimes referred to as the Neapolitan ‘Golden Age,’ a tradition for musical exchange between Spain and Naples was established that was to last for several centuries.”

Most of the selections are songs, where both Spanish and Italian cultures happily coincided. Both countries enjoyed courtly love songs, so that is where the present album’s emphasis lies. Emily van Evera, soprano, supplies the vocals for Circa 1500, where Nancy Hadden plays flute, recorder and crumhorn; Erin Headley plays viola da gamba, lirone (or lira da gamba, a bass member in the family of stringed instruments) and fiddle; Paula Chateauneuf plays lute and renaissance guitar; and Andrew Lawrence-King plays Gothic harp, Spanish harp and psaltery (an ancient musical instrument consisting of a flat sounding box with numerous strings plucked with the fingers or with a plectrum). 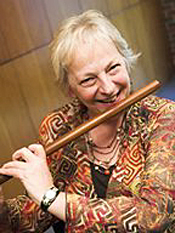 Circa 1500 make a joyful noise. Ms. Evera’s voice is sweet and pure, with wonderful control. And the music is quite straightforward, largely unadorned and unembellished, and all the better for it. For the most part, the dance rhythms sound spirited and enlivening and the lyrical elements gently flowing and lilting. All of it is highly melodic, with Circa 1500 born to play it. Interspersed among the songs are a few purely instrumental tunes like Milano’s La Spagna, Desprez’s Il fantazies de Joskin, Martini’s Fuge de morte, and others, which also sound lovely.

CRD recorded the performances in 1989 at West Dean College, near Chichester, Sussex, England, and re-released them with new packaging in 2012. One can understand their popularity; the performances, as I’ve said, come filled with joy, and the sound quality is excellent. Ms. Evera’s voice stands out prominently but not because it appears miked any closer than the other performers. Her voice is simply the surpassing instrument here, the center of attention. More important, it sounds clear and clean, with a perfectly natural tonal balance. The other four instrumentalists spread out around and behind the vocalist in a warm, ambient group. Although ultimate transparency is not the point, they do sound most realistic.