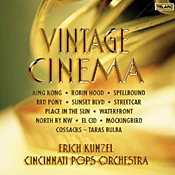 It seems as though every time I’ve read the inside back cover of one of Telarc’s booklet inserts, I found they were using the latest and greatest new audio technology to record their music. This 2008 disc, for instance, says they used a Sonoma Direct Stream digital workstation with DAD AX-24 DSD converters, EMM Labs DSD converters, a Genex 8500 DSD recorder, EMM Labs Switchman MK2 monitored speakers, ATCSM 150 and SCM50, etc., which means little to me except that their sound doesn’t ever seem to change much. Nevertheless, I thought this particular recording from Erich Kunzel and the Cincinnati Pops seemed distant, recessed, slightly foggy, and smeared. Maybe it’s just me. I put the disc away for a few days and went back to it later. It still didn’t sound very transparent or detailed. Despite my reservations, it appears natural enough if you’re comparing it to the sound you might hear sitting in the back half of an auditorium, which is maybe the point.

Anyway, the musical content this time revolves around old movie soundtracks from 1933 to 1962, starting, appropriately enough, with the main title and “Entrance of Kong” from Max Steiner’s score for the original King Kong (‘33). This score is appropriate because it’s often thought of as the first-ever complete movie music made expressly to underscore an entire film, music cues, themes, and all. Mostly, the first talkies borrowed pre-established classical music for their backgrounds until King Kong came along, so Kong sort of set the standard for movies to come. 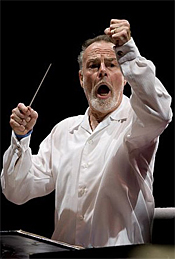 Kunzel goes on to cover things like Erich Wolfgang Korngold’s Adventures of Robin Hood, Miklos Rozsa’s Spellbound, Franz Waxman’s Sunset Boulevard, Leonard Bernstein’s brilliant On the Waterfront, Bernard Herrmann’s North By Northwest, and others, twelve tracks in all. My own favorite, incidentally, is Elmer Bernstein’s score for To Kill and Mockingbird, maybe because I love the movie so much and the music seems so fitting.

Kunzel gives all of them the usual Kunzel treatment, sometimes overglamorizing them, sometimes playing them straight. There is never any question about the grandiloquence of the music, though, especially the big tunes like Robin Hood and King Kong, which Kunzel seems to relish. If you’re familiar with Kunzel’s work (and who wouldn’t be, considering he probably recorded more albums than anybody in history), you can safely add this one to your collection.

However, I seem to remember some years earlier Telarc telling us they would never produce an album with less than an hour of content. This one contains only fifty-three minutes of music. Surely, there was room for more. I dunno. As I say, it’s played well enough, and if you’re an old-time movie fan, you’ll find some fine music here. Personally, I don’t much care for little bits and pieces of things, so with sound I didn’t much care for along with it, the disc didn’t impress me. But, who knows, maybe it would impress you more than it did me.