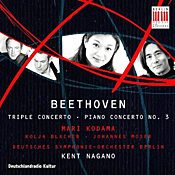 I’ve been following and admiring Maestro Kent Nagano’s career ever since hearing him conduct the nearby Berkeley Symphony from 1978-2009, during which time he was also the music director of the Opera de Lyon in France, conductor of the Halle Orchestra in England, principal conductor of the Los Angeles Opera in the U.S., and artistic director of the Deutsches Symphonie-Orchester Berlin in Germany. In 2006 he became the music director of the Montreal Symphony Orchestra in Canada and the Bavarian State Opera in Germany. He is, indeed, a world traveler and perhaps a world-beating musician. Here, he conducts the Deutsches Symphonie-Orchester in Beethoven’s Triple Concerto, which features his wife Mari Kodama on piano, with Kolja Blacher, violin, and Johannes Moser, cello.

Ludwig Beethoven (1770-1827) wrote his Triple Concerto in C major for piano, violin, cello and orchestra, Op. 56, in 1804, and it has remained one of the composer’s most popular pieces ever since. Nagano’s performance is fleet-footed yet it never sounds rushed. The work is lighthearted, and Nagano tries to keep it that way. As the booklet note reminds us, it is actually a sinfonia concertante where several instruments oppose the orchestra and each other. It was a style that had passed out of vogue by the time Beethoven wrote it, although he was able to inject new life into an old form. Nagano’s soloists interweave their parts effortlessly, giving the piece a lyrical Schubertian grace.

After the fairly lengthy opening movement, we get a much briefer but exquisitely gentle Largo. Where the piano and violin saw their moment in the first movement, the cello dominates here, and Moser carries it off well. 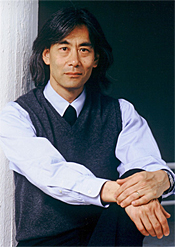 The Triple Concerto has all the earmarks of an orchestrated chamber trio, and that is how Nagano and his players approach it, with a sublime interaction among the soloists. They combine with the orchestra to explode into a joyous finale, which finds Nagano and company in high, relaxed spirits.

Contrasting with the Triple Concerto, Beethoven’s Piano Concerto No. 3 in C minor, Op. 37, is darker, more serious, and more dramatic. With Nagano and Kodama, the work sounds a touch more melancholy than it usually does but in no way sentimental or excessively Romantic. Indeed, Ms. Kodama makes a most-powerful statement throughout, with playing that sounds assured, delicate, powerful, moving, and heroic by turns.

Recorded at Jesus-Christus-Kirche, Berlin, in 2006 (Piano Concerto No. 3) and 2010 (Triple Concerto), the sound is quite respectable, making an already good pair of performances even better. You’ll find excellent imaging here, with a wide stereo spread, a deep orchestral image, and plenty of air around the instruments. It’s all lightly resonant and natural sounding. Miked at a moderate distance, the midrange displays a reasonable clarity, while being warm and smooth. Bass and treble extension as well as dynamic impact are modest, but the music hardly requires them to be much more. It’s a pleasing, lifelike sound rather than anything overtly “hi-fi” or audiophile in nature.