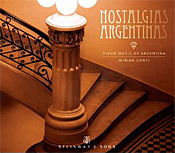 Argentine/American pianist Mirian Conti writes in a booklet note that “Nostalgia is a yearning for the past, be it in time or place--an aching to return home. Feelings of nostalgia are brought on by remembrances: images, smells, touch, music. For me, this recording brings with it nostalgia for my own musical past, for those Argentine composers lost or forgotten on the shelves of libraries, conservatories, and old pianos.”

She continues, “The 1920s represented a time of new musical tendencies in Europe and America. This was no less evident in Argentina where the continuous search for a national voice encountered many styles of expression. All of the music here, whether the musical language is romantic or modern, angular in its polytonality and accents or luscious in its impressionist mood, are without a doubt Argentine. They represent the many faces of classical Argentine solo piano music spanning from the 1920s to today. The composers were born between the 1880s and the 1930s and many of the pieces are based on either folk or popular dances.”

Fair enough. So, Ms. Conti waxes nostalgic for the music of her Argentine homeland, offering in the disc’s program over two dozen examples of dances from eleven different Argentine composers. The interesting thing, though, is that only two of the dances on the program actually date from the 1920s, the others written between 1947 and 2010. Nevertheless, they all look back to the Twenties for their roots, their inspiration, the “nostalgic” angle to which Ms. Conti refers. The works vary in style and tone, Ms. Conti’s piano playing is heartfelt, and the listening experience is a pleasure.

The album begins with Remo Pignoni’s Danzas tradicionales para piano, two traditional dances for piano. The first dance, “Por el sur,” is vibrant, and the second, “Como queriendo,” is Debussy-like in its sweet, Romantic impressionism. Ms. Conti plays the pieces with a conviction obviously drawn of love for this music. Her style is sublimely confident and polished, vaguely old fashioned yet contemporaneously appealing.

Next we hear a brief piece from Emilio Balcare, “La bordona,” a slow, sensual tango, which Ms. Conti performs as though there were three or four separate people involved in a small ensemble. The melodies and harmonies are infectious. 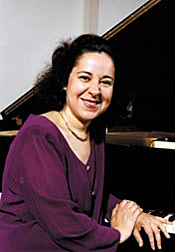 Horacio Salgan’s “Don Agustin Bardi” follows, a tango that sounds the opposite in style from the preceding one, Salgan’s being more pulsating, more vibrantly rhythmic. As we might expect by now, Ms. Conti attacks it with a wonderfully spirited vigor.

Then we get the centerpiece of the album, Carlos Guastavino’s 10 cantos populares, ten popular poems, as the name implies dances that are lyrical, songlike. Guastavino believed in the value of older musical traditions, admiring Chopin, Schubert, and Rachmaninov, so expect an older Romanticism at play here. He felt more-modern composers were destroying music, and when you listen to his compositions, it’s hard to argue with him. They are beautiful, especially given the loving attention Ms. Conti lavishes on them. Each piece shimmers like a tiny jewel, “No. 4” truly exquisite.

And so it goes through works by Carlos Lopez Buchardo, Floro Meliton Ugarte, Gilardo Gilardi, Mario Broeders, Osmar Maderna, and Julian Plaza. I could describe each of them, but I think you get the idea. Still, the composer I should emphasize before closing is Mario Broeders, whose work reflects a gentle, captivating melancholy. “Val criollo no. 3” is particularly lovely.

The album ends with a fast number, Julian Plaza’s “Nocturna,” a fine show closer and another excellent piece for Ms. Conti to demonstrate her sympathetic virtuosity on the piano.

Steinway & Sons recorded the album in 2012 at Sono Luminus Studios, Boyce, Virginia. The piano sound is gloriously rich and resonant, a single instrument practically duplicating a whole orchestra. The acoustic is just reverberant enough and the miking just close enough to produce a lifelike response with plenty of warmth and bite at the same time.