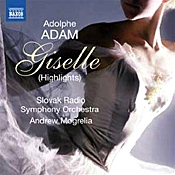 Giselle ou Les Wilis, which French composer Adophe Adam (1803-1856) premiered in 1841, has been around as a staple of Romantic ballet music for over a century and a half, and for good reason. The story of Giselle has all the ingredients for great listening: a supernatural, melodramatic plot involving dead spirits and curses and such; a young hero and heroine in love; a cruel if not downright evil villainess; and an appropriately rousing yet sentimental finale. It's hard for any conductor not to be able to bring out the beauty and excitement of the score, and Andrew Morgrelia does it as well as almost anyone in this set of highlights from his complete Naxos recording.

People have made many cuts, additions, and changes to the ballet's working score over the years, so having only the highlights isn't as drastic a situation as you may imagine. In fact, the shorter score is probably best of all for home listening. At about an hour, it has not only the advantage of conciseness but of continuity, presenting the work's best and most well-known music in a seamless medley.  Besides, the highlights fit nicely on a single disc. For those requiring the full score, I can recommend Mogrelia, of course, from which this set derives; plus Fistoulari's old recording with the LSO (Mercury) and Bonynge's with the Royal Opera House, Covent Garden (Decca), all in two-disc sets. They include almost every bit of music Adam wrote for the work and additional material he didn't write, along with every possible repeat. However, I would also add that if it's only the highlights you want and you're willing to pay a little more for the very best, the folks at HDTT have remastered Jean Martinon's 1958 recording with the Paris Conservatoire Orchestre, and it benefits from not only the best performance of the music ever but the best sound as well.

Anyway, back to Mogrelia. His interpretation of the score is graceful and elegant in a smoothly Romantic manner. It's not quite as characterful as Martinon's version or the others, but at least it's close. Let's say Mogrelia's rendition is more genteel than Martinon's, Fistoulari's, or Bonynge's. 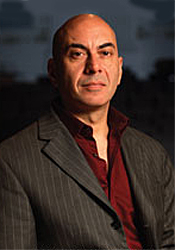 Mogrelia and his Slovak players produce a performance that sounds very balletic as opposed to one intended solely for the concert stage. That is, Mogrelia appears to be leading an actual ballet production rather than making a stereo recording. Although there is not too much in his rendering to set the blood to racing, there is a great deal of beauty and lyrical refinement involved. The Slovak Radio Symphony play with a charming ease, even if they are not always as polished as some other big-time orchestras in this work.

Naxos took the highlights for this 2012 disc from Mogrelia's complete set, recorded in the Concert Hall of Slovak Radio, Bratislava, in 1994. The sound is big, warm, round, and sometimes a little thick in a typically Naxos way, with a soft glow occasioned by the resonance of the hall. Moreover, while you also hear a kind of velvety texture to the sonics, which is pleasing and easy on the ear, there isn't a lot of orchestral depth or much dynamic punch involved, except in the first act March and a couple of other places where we find a few good bass thumps. Still, you get a wide soundstage and a feeling of sheer size, even if the midrange is a tad veiled.

Email ThisBlogThis!Share to TwitterShare to FacebookShare to Pinterest
Labels: Adam