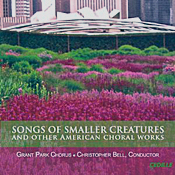 The Grant Park Orchestra and Chorus, publicly supported organizations that offer free performances at the Grant Park Music Festival in Chicago, Illinois, each summer, have been entertaining listeners for years with frequently offbeat, little-known material. Here, the chorus goes it alone under the direction of Christopher Bell and present a collection of short pieces by modern American composers, some of the works descriptive, some serious, some humorous, some of them in world-première recordings, and all of them a pleasure.

The program begins with the music of Abbie Betinis (b. 1980), her three-movement vocal work that gives its title to the album, Toward Sunshine, Toward Freedom: Song of Smaller Creatures. The composition begins with “The bees’ song,” a cute, expressive piece based on a poem by Walter de la Mare, a piece with lots of z’s in it. Next is “A noiseless, patient spider” from the Walt Whitman poem, followed by “envoi,” which uses a nonsense text by Charles Swinburne, the music sounding, as a note explains, like the hushed flapping of butterfly wings. It’s all very simple yet quietly haunting and moving.

After Ms. Betinis we get Buzzings: Three Pieces about Bees from Lee Kesselman (b. 1951). More of those z’s! The three pieces are “To make a prairie,” “A Bee his burnished carriage,” and “Bee! I’m expecting you,” all deriving from poems by Emily Dickinson. Like most of Ms. Dickinson’s poetry, the songs are brief, sweet, and meaningful. The choir sing them, as they do throughout, with clarity, precision, and, most of all, with feeling. 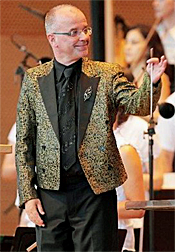 And so it goes, with music by Eric Whitacre (“When David Heard”), Stacy Garrop (Sonnets of Desire, Longing, and Whimsy), David Tredici (“Acrostic Song”), Ned Rorem (Seven Motets for the Church’s Year), and Paul Crabtree (Five Romantic Miniatures, which finds its inspiration in The Simpsons television show). The program ends with more from Whitacre, “Sleep.” As Whitacre notes, music often depends upon the “perfect balance between sound and silence,” and in this regard we may judge all of these presentations a success. The album will not disappoint lovers of choral music.

Producer James Ginsburg and Cedille engineers Eric Arunas and Bill Maylone recorded the music in concert at the Harris Theater for Music and Dance in Millennium Park, Chicago, Illinois, in 2011. It’s a mildly reverberant acoustic, yet the sound is remarkably smooth and clean, with just a touch of natural hall resonance to give it a warm glow. The singers appear well spread out across the sound stage, and the engineers give them ample opportunity to communicate clearly and effectively. Because there is a sense of depth as well as breadth to the chorus, I would imagine it’s quite close to being there.

Email ThisBlogThis!Share to TwitterShare to FacebookShare to Pinterest
Labels: Betinis