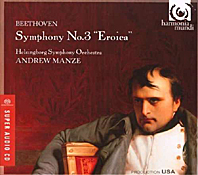 Beethoven wrote his Symphony No. 3 “Eroica,” Op. 55, in 1804 and premiered it in 1805, marking something of a new beginning in the development of symphonic structure and prompting endless discussions among critics about what it all means. Violinist and conductor Andrew Manze tells us what it means: It means riveting music, even if his interpretation is more elegant than it is scintillating.

Manze, who specializes in repertoire from the late seventeenth to early nineteenth centuries, was the Music Director of the Academy of Ancient Music from 1996 to 2003 and then the Artistic Director of the English Concert, both period-instrument groups. Since 2006 he has been the Principal Conductor of Sweden’s Helsingborg Symphony Orchestra, who play on modern instruments. It makes no difference; Manze brings with him the adventurous sensibilities of a period-instrument conductor, making his performance of the Third Symphony something more than ordinary.

Accordingly, Manze takes the first moments of the symphony’s opening Allegro con brio in strong, broad strokes, followed by a highly charged, exceptionally heroic follow-through. For the first few minutes, the conductor maintains a constant forward momentum as though Napoleon himself were driving straight through Europe hell-bent on world conquest. These initial statements characterize a Beethoven with plenty of snap, the intensity always under Manze’s utmost control. However, the conductor is not excessively stringent about his tempos, varying them considerably over the course of the movement, becoming quite gentle at times and then almost violent. The orchestra is relatively small at about fifty-nine players, and they offer up a lean, clean, intimate-sounding Third, even though with the speed changes Manze takes, the performance may not appeal to all tastes.

With the Funeral March, Manze is more consistent with his pacing, not that that’s good or bad. He chooses to observe a steady, dignified tempo. While it is slower than Beethoven’s tempo markings would indicate, it’s close to what a lot of older, traditional conductors such as Bohm, Barbirolli, and Klemperer provide. More important, Manze keeps one’s attention for the duration, never allowing the music to sound like an actual dirge, even if it is one.

It’s in the Scherzo that Manze shows off his period credentials, taking the composer at his word and producing a very quick, bubbly concoction that’s hard to resist.

Nevertheless, it’s in the Finale where Manze and his players truly shine. Tying the closing statement nicely to the first movement, he opens broadly, then proceeds to a stately gait, followed by a gradual quickening. Manze adroitly controls the ebb and flow of the music while providing grace and excitement aplenty, especially in the big final moments. I enjoyed this interpretation immensely for its sensible, well-governed, yet bold enterprise, the interpretation seeming to get better as it goes along. 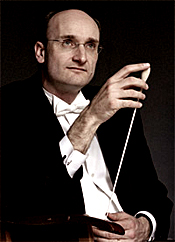 Coupled with the Third we find Beethoven’s twelve little Contredanses and then the finale of the ballet from The Creatures of Prometheus. It’s not only good music, we see the relationships in the music. Listen to the seventh Contredanse, the ballet music, and then the Finale to the Third, and you’ll see what I mean. Together, it puts the icing on a very tasty cake.

The sound Harmonia Mundi obtain is beautifully clear, detailed, and well balanced tonally, with just the right amount of resonance and air around the instruments. Recorded in SACD at Helsingborgs Konserthus, Helsingborg, Sweden, in 2007, the sonics are among the best I’ve heard in this work. I listened to the SACD stereo and regular stereo layers of this hybrid stereo/multichannel recording and found them both dynamic and wide ranging, the SACD sounding a touch more precise and forceful. If there is any small reservation I might have it’s that there is sometimes a bit too much activity from the left side of the stage, with not quite enough to fill in the middle. In fairness, I only noticed this effect on occasion, so it is probably not worth mentioning. Otherwise, we hear a strong, taut transient response, with a percussion and impact that never sounded better in a recording of the Third.