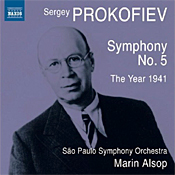 After listening for years to Marin Alsop’s recordings with the Baltimore Symphony, it came as a pleasant experience to hear her also as the Principal Conductor of the Sao Paulo Symphony Orchestra (Orquestra Sinfônica do Estado de São Paulo, or OSESP). She took over the Brazilian orchestra on a five-year contract starting in 2012, and I believe this is her first recording with the group and the first recording in a complete cycle of Prokofiev symphonies she plans for Naxos.

Sergei Prokofiev (1891-53) wrote the fifth of his seven symphonies in 1944, near the end of World War II. Next to his First Symphony, the Fifth Symphony is probably the most well liked of the bunch. The composer called the work “a symphony about the spirit of man,” his response to the turmoil of the War. As such it opens with the pain of that nightmare, a kind of prelude to the peace to come. By 1944 the Soviets could see an end to the War, and a relatively restrained opening Andante builds slowly, seriously and grandly, Ms. Alsop developing it with a gentle yet firm hand.

A Scherzo follows, which lightens the climate considerably. You can tell the composer initially intended the music for his Romeo and Juliet ballet; you can feel the same spirit present. Ms. Alsop handles it particularly well, especially the surging, constantly shifting rhythms.

Ms. Alsop’s high point, however, is the long, brooding third-movement Adagio, with its purely lyrical elements. Here, she brings out the delicate ballet-like qualities of the music. Although she takes most of the symphony at a fairly relaxed pace, she actually advances the argument of the Adagio at a greater intensity than we normally hear. It easily sustains one’s interest at a high level. 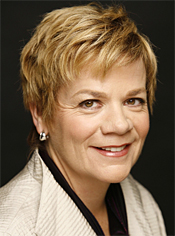 The finale should bring the symphony to a joyful close, and Ms. Alsop accomplishes this end in good measure. Her interpretation is passionate, melodious, and triumphant, carrying the piece to a fitting conclusion that I found quite satisfying.

Coupled with the Fifth Symphony, Prokofiev’s symphonic suite The Year 1941 makes an apt companion. The composer wrote it in response to the German invasion of the Soviet Union, so what we get in the disc’s two works is music about the early part and the winding down of the War. However, Soviet censors didn’t much care for the tone of The Year 1941 (not finding it momentous enough); Soviet critics didn’t much like the music, either; and Soviet audiences didn’t much respond to it. There are moments within it, true, that seem to border on satire, but one cannot deny the work’s overall honest significance. I’ve always rather liked its various blustery war moods, and I particularly like the vigorous way Ms. Alsop responds to them.

Naxos recorded the music at the Sala Sao Paulo, Brazil, in 2011. Moderately distanced, the sound has a good deal of orchestral depth involved, if not so wide a left-to-right stereo spread. Still, it’s quite impressive in a realistic sort of way. While there are some good, strong outbursts from time to time, most of the dynamics seem a trifle subdued, the midrange a tad veiled, and the high end a bit muted. This might be the result of the miking, too. In any case, the sound is distinctly of the concert-hall variety rather than overtly “hi-fi.”