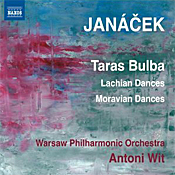 Czech composer Leos Janacek (1854-1928) has never been the most-popular writer on the musical stage, but there are several of his works firmly established in the basic repertoire. Among these are his Sinfonietta as well as the subject of this disc, his "rhapsody for orchestra" as he called it, Taras Bulba, a piece in three movements he premiered in 1918 and which he based on sections of a novel by the Russian writer Nikolai Gogol. The three movements are small tone poems describing various episodes in the life of the seventeenth-century Cossack leader and warrior Taras Bulba and his vision of liberation for his people.

While one can find any number of fine recordings of the work on CD, for example those by Charles Mackerras and the Vienna Philharmonic (Decca) and Vaclav Neumann and the Czech Philharmonic (Supraphon), this new release from Maestro Antoni Wit and the Warsaw Philharmonic is almost as compelling, and one may safely mention it in the same breath.

The music opens with the "Death of Andrij," Taras Bulba's youngest son, who has fallen in love with the daughter of his enemy and fights against his father, only to have his father kill him. Wit takes the opening very gently, building the love theme carefully. As he does with the rest of the Rhapsody, Wit adopts a broadly lyrical approach, letting the musical pictures unfold gracefully and deliberately. Nevertheless, when the high drama arrives, Wit is ready for it and creates a heady forward momentum. In other words, you'll get both Romance and excitement from the conductor.

The central movement, "Death of Ostap," deals with the grief of Taras Bulba's eldest son, Ostap, for his brother, Ostap subsequently captured by the enemy Poles and taken to Warsaw for execution. Bulba the elder follows in disguise and calls out in anguish at his son's death. Wit recreates the pain of Bulba fairly effectively, the music gliding effortlessly along under his guidance. Mackerras probably adds a degree more passion to the atmosphere, but it's close. 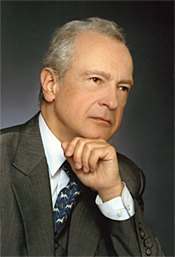 The final movement, "Prophecy and Death of Taras Bulba," concerns the capture and death of Taras Bulba, and his final prophecy that "A Tsar shall arise from Russian soil, and there shall not be a power in the world which shall not submit to him!" Here, Wit clearly expounds upon the importance of Bulba's final exclamation and ends the work on a tragically melancholy yet triumphant note.

Coupled with the rhapsody we find two dance suites by Janacek, the Lachian Dances (1889-90) and the Moravian Dances (1891). Janacek based the suites largely on Czech folk music of his day and well before, the songs describing a countryside and traditions quickly fading. They exhibit a much lighter, more joyous tone than the Taras Bulba music, as we might expect, and hint of Dvorak. Wit appears to be enjoying himself, and so do we.

Naxos recorded the music at Warsaw Philharmonic Hall, Poland, in 2010-2011, obtaining generally good results. The sound is very smooth and natural, with a wider dynamic range and transient impact than we usually find on a Naxos release. Although the sonic picture is a tad lacking in overall transparency, bit heavy, and a slightly close-up, there is a decent sense of depth and space to the acoustic. Along with a strong bass accompaniment, the organ pedals sounding quite deep and authoritative, the result is pleasing, if not entirely "audiophile."

Email ThisBlogThis!Share to TwitterShare to FacebookShare to Pinterest
Labels: Janacek