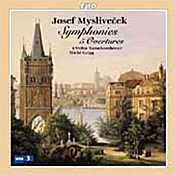 What do you mean you’ve never heard of Josef Myslivecek? He was a contemporary (1737-1781) of Wolfgang Amadeus Mozart, a composer who came from Prague to Italy to Vienna to make his fortune, who wrote more symphonies and operas that practically anyone at the time, who engaged in business dealings with Mozart’s father, who people say had an influence on the younger Mozart, and who, like W.A. Mozart, died at a relatively young age, forty-three.

If you’ve never heard of him, well, neither have many people today. One listen to the first of seven symphonies on this two-disc set and you say to yourself, “Sounds a lot like Mozart or Haydn.” Then by the time you get to his third or fourth symphonies, you’re saying “Sounds a lot like Myslivecek’s first few symphonies.” The problem with the symphonies, which occupy the first disc, is that they show too little invention and seem all to sound alike. 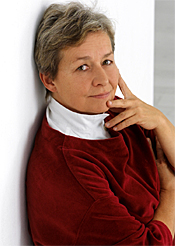 The second disc tends to rectify this situation considerably, however, as the five overtures contained there are far more interesting, more original, more lively, more sparkling, and more glowing than the symphonies. I quite enjoyed them but couldn’t understand why CPI hadn’t put them on the first disc to get our attention. Likewise, I couldn’t understand why CPO arranged the symphonies in such an odd fashion, starting with No. 3, going to Nos. 5 and 6, then back to No. 4, 2, and finally No. 1. I thought the booklet would explain something about the arrangement being the actual sequence of their composition, but it mentioned nothing of the matter. Maybe the record producers arranged them in some kind of order of popularity. I dunno.

The most outstanding aspects of this album are the exuberant playing of L’Orfeo Baroque Orchestra under the direction of Michi Gaigg, and the equally vivacious sound produced by the CPO engineers. The two dozen or so players in the ensemble ring out clearly and distinctly, with never an overly bright or unduly dull moment. The stereo spread is wide, the tonal balance is near perfect, and the stage dimensions show more than adequate depth. Disc two, especially, is a joy to listen to, although, as I say, the symphonies on disc one are a bit of a chore.

Email ThisBlogThis!Share to TwitterShare to FacebookShare to Pinterest
Labels: Myslivecek