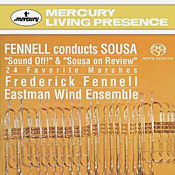 Conductor Frederick Fennell's recordings of John Philip Sousa marches, done in 1960 and 1961, have pretty much been in a class by themselves for over half a century. It was good to have them on Mercury Living Presence LP's, then a CD remastered back in the 1990's, and it's good to have them again on a newer Super Audio CD.

Fennell's way with Sousa is enthusiastic, to say the least. His exuberance overflows in tempos that are not always conducive to marching but always right for getting the blood running and the spine tingling. British critics seem to think these are typically "American" interpretations, meaning, I suppose, more enthusiastic and carefree than the English might play them. Perhaps. There is surely an aura of high good spirits about these Fennell readings.

The album combines two of Fennell's Sousa LP's, Sound Off and Sousa on Review. However, while there are twenty-four items represented, not every listener will be happy with the selections. Namely, the disc does not contain many of Sousa's best-known marches. You'll find no "Stars and Stripes Forever" here, or a "Washington Post" or a "Thunderer" or a "Semper Fidelis." What you do get are mostly lesser-known works from Sousa's output of over 100 marches: "Nobles of the Mystic Shrine," "Our Flirtation," "The Kansas Wildcats," "The National Game," that kind of thing. Of course, there are still a few old reliables: "The Liberty Bell" (can we listen today without thinking of Monty Python?), "Manhattan Beach," and "The Invincible Eagle." Fennell's Eastman Wind Ensemble closely approximates the size and disposition of Sousa's Marine Band, and Fennell said he tried to emulate Sousa's conducting style. I'm not sure. I rather suspect that Fennell is more ebullient in his performances than Sousa ever was. 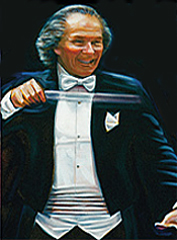 In addition to Fennell's sometimes impetuous forward impulse, there is also a noticeable difference between the sound of the 1960 and 1961 recordings. The first twelve items are less weighty in the mid bass than the last twelve. The lightness gives them a degree more transparency, although I confess I preferred the greater realism of the fatter bass. The disc itself provides the music in three formats, with playback depending upon one's equipment. There is a three-channel layer for SACD, reproducing the recordings' original three-mike arrangements; there is a two-channel layer for SACD, again for SACD players only; and there is a regular two-channel layer for conventional CD players.  It's strong, vivid, well-projected sound in any case, especially in SACD.

Possibly the only drawback to the proceedings is that the SACD is more costly than, say, EMI's digital two-disc recording of forty-three Sousa marches by Lt. Col G.A.C. Hoskins and the Band of HM Royal Marines, which EMI offer at a bargain price. Ah, heck, buy 'em both.

Email ThisBlogThis!Share to TwitterShare to FacebookShare to Pinterest
Labels: Sousa