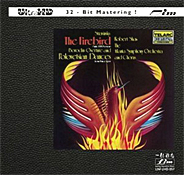 This newly remastered audiophile edition of Stravinsky's Firebird Suite from LIM (Lasting Impression Music, an affiliate label of FIM, First Impression Music) takes me way back. I believe it was just the second album recorded by the then-fledging Telarc Records corporation. When it came out on LP in 1978, it made Telarc one of the first companies to release a digital recording of a major symphony orchestra. Their first digital album had been with Frederick Fennell and the Cleveland Symphonic Winds doing Handel and Holst, and this one with the Atlanta Symphony followed soon after.

I remember all this because I was writing for the $ensible Sound magazine at the time, and Telarc was kind enough to send me a copy of The Firebird Suite for review; I got rather excited since the recording was among the first of its kind. I also remember, though, that while I found the sound quite good, I was not as taken by Shaw’s performance, which seemed OK but not exceptional to me at the time. So it was with much anticipation that I looked forward to hearing it again after more than three decades, remastered to today’s best audio standards by LIM. And what would I find out? Maybe the newly invigorated sound would help me to appreciate Shaw’s rendition even more than I had before.

Anyway, the Russian-born, American composer Igor Stravinsky (1882-1971) wrote his complete Firebird ballet in 1910, and along with his subsequent ballets Petrushka (1911) and The Rite of Spring (1913) would forever influence the nature of symphonic music, closing out the Romantic era and ushering in what today we refer to as the Modern period of classical music. I doubt that Stravinsky had any idea of the ultimate impact he and others of his generation were introducing into the world of music, but we’re all probably the better for it. Certainly, the Firebird shows us the beginnings of these changes, although not nearly so much as the Rite of Spring would just a few years later.

The Firebird could hardly lose. Stravinsky based the ballet on various Russian folk tales about a magical bird that could grant help or harm to those who captured him. A young prince wandering through the enchanted land of Kashchei the Immortal happens upon the bird and captures him. The bird grants the prince a magic feather in return for his release. From there we get an adventure involving the prince, a group of fair lovely maidens, an inevitable love, an argument between the prince and Kashchei, some physical conflict, and a final resolution courtesy of the bird. It’s all very exotic, warmhearted, and exciting.

In 1919, the composer devised a suite from the complete ballet, paring it down to about twenty minutes or so. Much later, in 1945, he revised the suite, making another, longer one, but Robert Shaw chose to record the earlier, more familiar arrangement. This original suite benefits from being more concise, offering all of the most-familiar music in a briefer form.

Under Shaw, the introduction has a suitably dark and mystical quality to it. “The Firebird and Her Dance” comes off well, too, with more color than I had remembered from my first listen so long ago. The “Round Dance of the Princess” sounds sweet and melancholy at the same time and conjures up comparisons to the work of Rimsky-Korsakov. “The Infernal Dance of Kashchei” displays a good deal of energy and generates a requisite passion. Then the anticlimactic “Lullaby” leads us effortlessly into the Finale, which Shaw infuses with much joy and jubilation, ending with a truly thunderous crash from Telarc’s patented big bass drum. 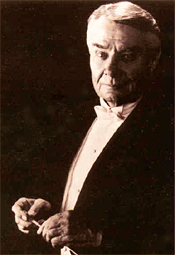 If I could find any “however” involved, it is that at a much lower cost one can buy Antal Dorati’s complete Firebird on a Mercury Living Presence recording, which remains the benchmark performance of the work and still sounds remarkably good. Alternatively, one could also buy Riccardo Muti’s rendition of The Firebird Suite coupled with Mussorgsky's Pictures at an Exhibition on a single EMI disc, both of which are excellent recordings interpretively and sonically. Nevertheless, Shaw’s rendition does have the benefit of LIM/Telarc’s superb sound, the best of the lot, and, the fact is, the performance is better than I first gave it credit.

Under Shaw’s direction, the two accompanying pieces by Aleksandr Borodin (1833-1887)--the Overture and “Polovetsian Dances” from Prince Igor--share a similar distinction with The Firebird. These performances may face stiff competition from Georg Solti and the LSO on LIM’s own audiophile remastering of Decca’s Romantic Russia, but they’re satisfactory in their own, more-romanticized, low-key manner, especially the choir, which sings splendidly.

Telarc engineer Jack Renner and producer Robert Woods recorded the music in Symphony Hall, the Atlanta Memorial Arts Center, in June of 1978. The sonics as remastered by LIM in their 32-bit UltraHD mastering process are sharply focused without in any way sounding hard, metallic, edgy, glassy, or “digital.” Indeed, the recording has a full, rich, fluid texture that probably replicates the sound of the orchestra and hall pretty well, a sound from LIM slightly smoother than Telarc’s own mastering. The miking is a tad close for my taste, but it does capture a wonderful clarity and in the Borodin very natural, lifelike voices, if not so much orchestral depth. As expected, the bass is deep and transient impact impressive.