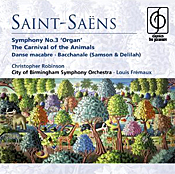 This is just a note in case you're counting the number of times record companies have released Louis Fremaux's recording of Saint-Saens’s "Organ" Symphony over the years.

EMI first released the recording in 1972 on their Columbia Studio 2 vinyl label, EMI's answer to Decca's Phase Four at the time. It was quite a spectacular LP in its day and recorded, as I remember, in four channels. But EMI never officially imported it to this country, and EMI's American Angel division never to my knowledge issued it over here. Instead, Klavier released it on LP in the U.S., Klavier being one of the country’s smaller record companies and specializing back then in taking up some of the slack left by the bigger outfits. Appealingly, the Klavier LP mastering was leaner sounding and in some ways more transparent than the original EMI. After that, in the late 70's, EMI issued a second LP of the work in their mid-priced Greensleeve series. This time the sound seemed even warmer and more bass dominant than before.

Then came the CD era in the early Eighties, and again it was Klavier who first issued a full-priced CD of the recording in America. And again the Klavier sonics were slightly more natural sounding than the subsequent, mid-priced EMI Studio CD that followed it in the U.S. After that, Klavier withdrew the recording from their catalogue. Meanwhile, EMI issued it several more times, the recording appearing in a bargain-priced, two-CD Seraphim set, on a mid-priced Eminence disc, and on the current Classics for Pleasure issue. In between time, a company called Royal Classics issued it (1994) coupled with a Dvorak Ninth Symphony conducted by Rudolf Kempe. Interestingly, the EMI English sound has remained consistent over the years--warm, mellow, bassy, and robust--just as Klavier's sound filled in a little more of the middle. 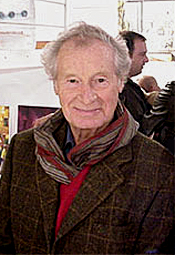 Why do I mention any of this at all? Because Fremaux's performance of the "Organ" Symphony is the only version I have ever felt was worthy of mentioning in the same breath as Charles Munch's famous 1959 RCA recording with the Boston Symphony (available on RCA or at extra cost on an XRCD audiophile remaster by JVC). The Fremaux performance deserves its multiple releases. The interpretation displays energy, zest, excitement, and grace aplenty, with a second-movement Adagio that flows over the listener in soft, warm waves.

My only minor concern at the moment is that if one wants the absolute best sound in the Fremaux recording, one has to find a used copy of the old Klavier (LP or CD), and that may be difficult without paying an arm and a leg for it. Maybe someday one of the audiophile houses--FIM or HDTT, perhaps--will remaster it, and we’ll have the best of all worlds. In the meantime, the Classics for Pleasure release contains not only the symphony, which is brief at well under half an hour, but good performances of the Danse macabre, The Carnival of the Animals, and the Allegro appassionato as well. It’s quite a bargain.