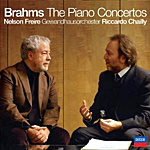 When German composer Johannes Brahms (1833-1897) wrote his two piano concertos almost a quarter of a century apart in 1854 and 1878, the public seemed indifferent, and critics were downright hostile. By the middle of the following century, however, both concertos were firmly established in the basic repertoire, the public having slowly accepted them as classics of their kind. I wonder if it isn't time to reassess their importance.

The Piano Concerto No. 1 in D minor, Op. 15, was Brahms's first full-scale undertaking in the orchestral field, and perhaps the work suffered from being too much in the shadow and under the influence of Beethoven. The whole first half of the opening movement is too big, stormy, craggy, wayward, and, for me, bombastic for the rest of the piece; then, when the second subject takes hold, the mood is so drastically changed, it comes not so much as a breath of fresh air as a huge question mark. The second movement is a bit too noble yet sentimental to my ears, but it comes off better than the first movement for its having a more stable center, a stronger focus. The final movement is my personal favorite part of the concerto, a notably lighter, more high-spirited affair than the tumult that precedes it, yet also possessing an obvious seriousness. As for the Piano Concerto No. 2 in B-flat major, Op. 83, it seems to occupy an entirely different musical world altogether, one filled with more lyricism yet accumulated gravity as well.

Brazilian pianist Nelson Freire is a remarkably talented musician whose most preeminent gift is his complete and utter naturalness, his unforced charm. His playing seems almost casual, it's so smoothly rendered. For this reason, I appreciated his work more in the Second Concerto than in the First, because in the Second he seems more at home. Then, too, he is accompanied quite accommodatingly by maestro Riccardo Chailly, and he's supported by one of the oldest and most-refined orchestras in the world, the Leipzig Gewandhaus. For a set of both the Brahms Concertos, one could hardly ask for more.

Unless it's the sound, which comes off as a tad odd. The jewel box says it was recorded live in 2005 and 2006, so I expected the usual too distant or too close miking and audience rustling. I was right; it is recorded relatively close, fortunately minimizing any peeps from the listeners. But as I feared, it's too close. While we're on top of the piano and orchestra, there is little compensating detail revealed. In fact, compared to four or five other Brahms Piano Concerto recordings I had on hand for comparison, this one is closer and softer than any of the rest. I dunno; it's a nice set of performances, but do we really need more recordings of these pieces when we already have the likes of Giles, Curzon, Kovacevich, Pollini, and others doing them just as well or better, and in better sound? I rather think this set may appeal more to established fans of the musicians involved or to dedicated collectors than to the music-buying public in general.