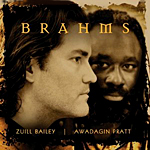 The collaboration of Zuill Bailey, cello, and Awadagin Pratt, piano, two well-known and highly accomplished musicians, suits the works of Johannes Brahms (1833-1897) especially well. The two men have been friends since college and have performed together on numerous occasions, so they have an instinctive feel for combining the right energies in the composer's music. On the present disc, they perform several of Brahms's longer pieces for cello and piano, as well as several shorter songs transcribed for the instruments. The compositions cover most of Brahms's career and explore his varied temperaments, with the two players adapting their style impeccably to each occasion.

The program begins with Lerchengesang ("Lark Song," 1876), a brief but lovely piece, light and airy as a bird in flight or in song. It's an apt preface to the early Sonata No. 1 in E Minor, Op. 38 (1865) that follows. The Sonata is a three-movement affair, Brahms having thrown out the slow section on the advice of Clara Schumann. It's a mellow, melancholy work in a lyrical mood. Bailey and Pratt play the piece with great passion, yet with great sensitivity, too. The dynamic contrasts alone give you an idea of the work's power and the artists' joy in performing it.

Next, we get a series of shorter pieces, songs mainly, arranged for cello and piano. They start with Feldeinsamkeit ("Solitude in the Fields," 1879), which continues the somewhat melancholy tone of the preceding Sonata, aided by the cello's inherently sonorous sounds. Next is Wie Melodien ("As Melodies," 1886), clearly more melodic, more sweetly poetic in its rhythms than the previous numbers. After that, there is Sapphische Ode ("Sapphic Ode," 1884), describing not what you may think but a verse scheme. Liebestreu ("True Love," 1853) comes next, a particularly passionate little work; then Sonatensatz (1853), actually a violin sonata by Brahms, Robert Schumann, and Albert Dietrich, here adapted for cello and piano; and Minnelied ("Love Song," 1877), which expresses the radiance of young love.

Brahms composed his Sonata in F Major, Op. 99 (1886) in a more traditional four-movement arrangement, and it shows the effects of maturity on the composer's music. Not that that is necessarily a good thing, as the piece begins in a much more-agitated fashion than his earlier Sonata. Still, it rises above a surly introduction to achieve a lofty bravura and a tender spirit as it goes along, the performers always in harmonic and interpretive accord with the music and with each other.

The disc ends with Brahms's famous Wiegenlied ("Lullaby," 1868). You wouldn't think so familiar a tune could sound so fresh, but these fellows make it come to life once more in a most affecting manner. It concludes the program sweetly and gently--ironically, on the freshest of all possible levels.

Telarc recorded the album at the Oberlin Conservatory of Music, Oberlin, Ohio, in 2010. They miked the performers fairly closely, producing a relatively big sound from only the two instruments yet creating a realistically smooth and reverberant sound. While it hasn't quite the lucidity one might expect, it is nonetheless most natural if played back at an appropriate level. It's a luxuriant, well-upholstered sound that nicely complements the rich, resonant sonorities of the music.